Amba Taipei Songshan Hotel is a 4 star hotel located in the east part of Taiwan’s capital. We definitely had a blast staying at this hip hotel, which is actually part of the ‘amba’ chain in Taiwan, each of them having a distinct style.

The hotel is pretty new; it was opened in the summer of 2016 and everything still looks extremely new, polished and clean, there wasn’t even a scratch we could find on any of the furniture!

Read all about our experiences at this cool hotel below: 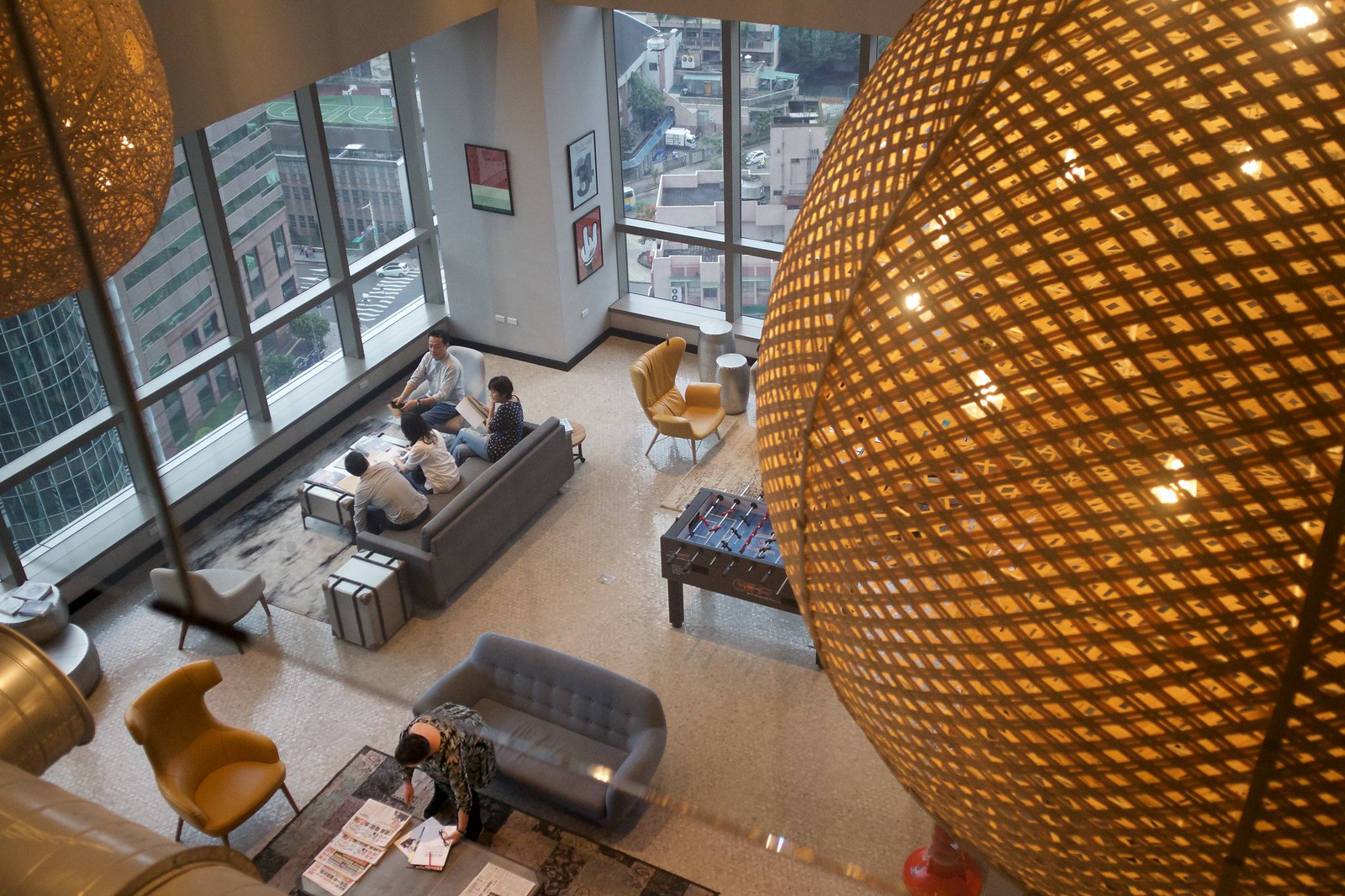 Mainly catering to business guests, as it is situated close to Taipei’s financial district, the amba Songshan Hotel is a cozy and efficient boutique hotel, effortlessly showing off its’ retro minimalistic yet artsy decor in places you might least expect to find it. For example, every room number from the 17th to the 20th floor shows a particular event that took place in that year. See below a picture of room number 1950, which is the year that Snoopy was created! 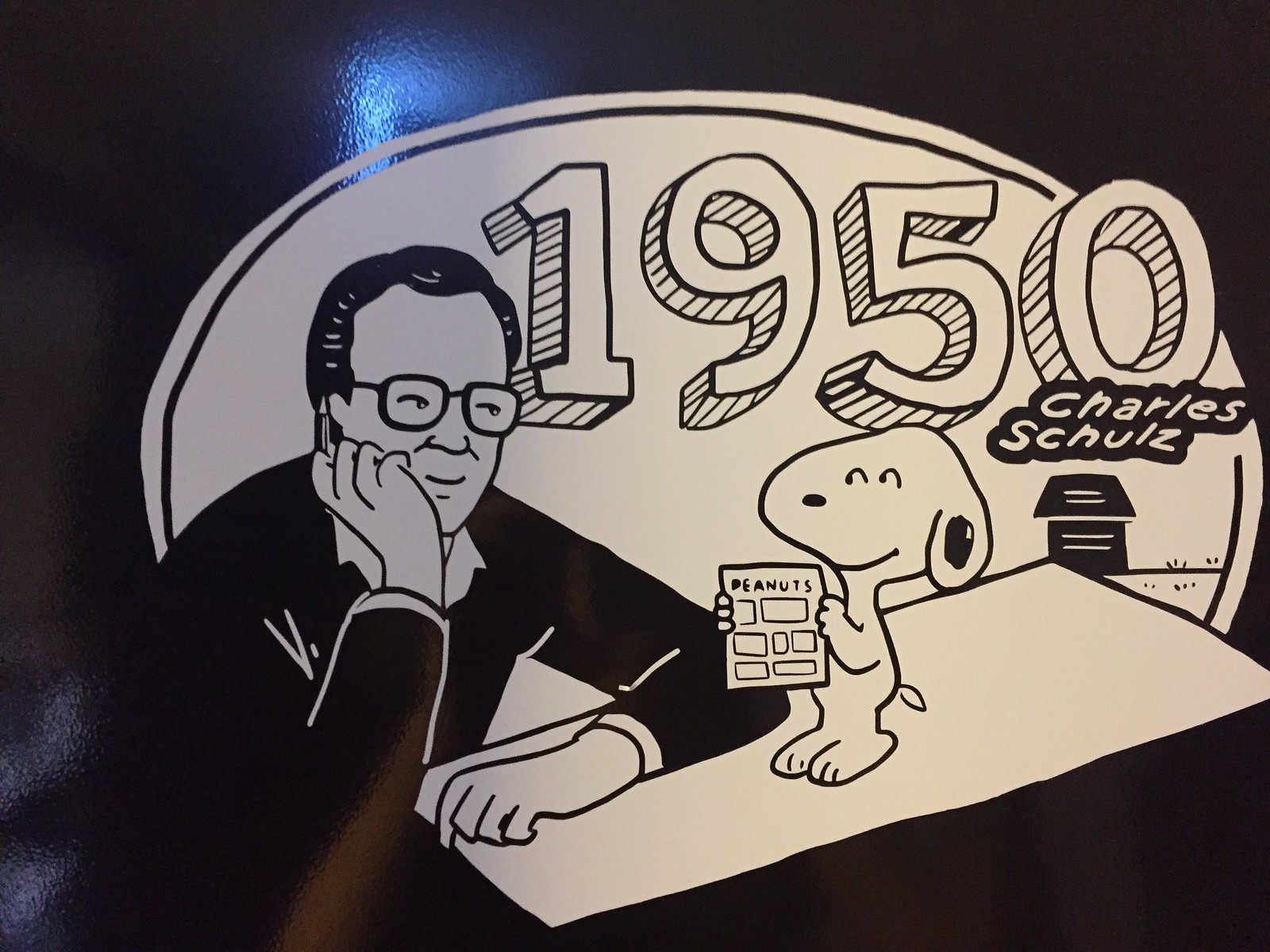 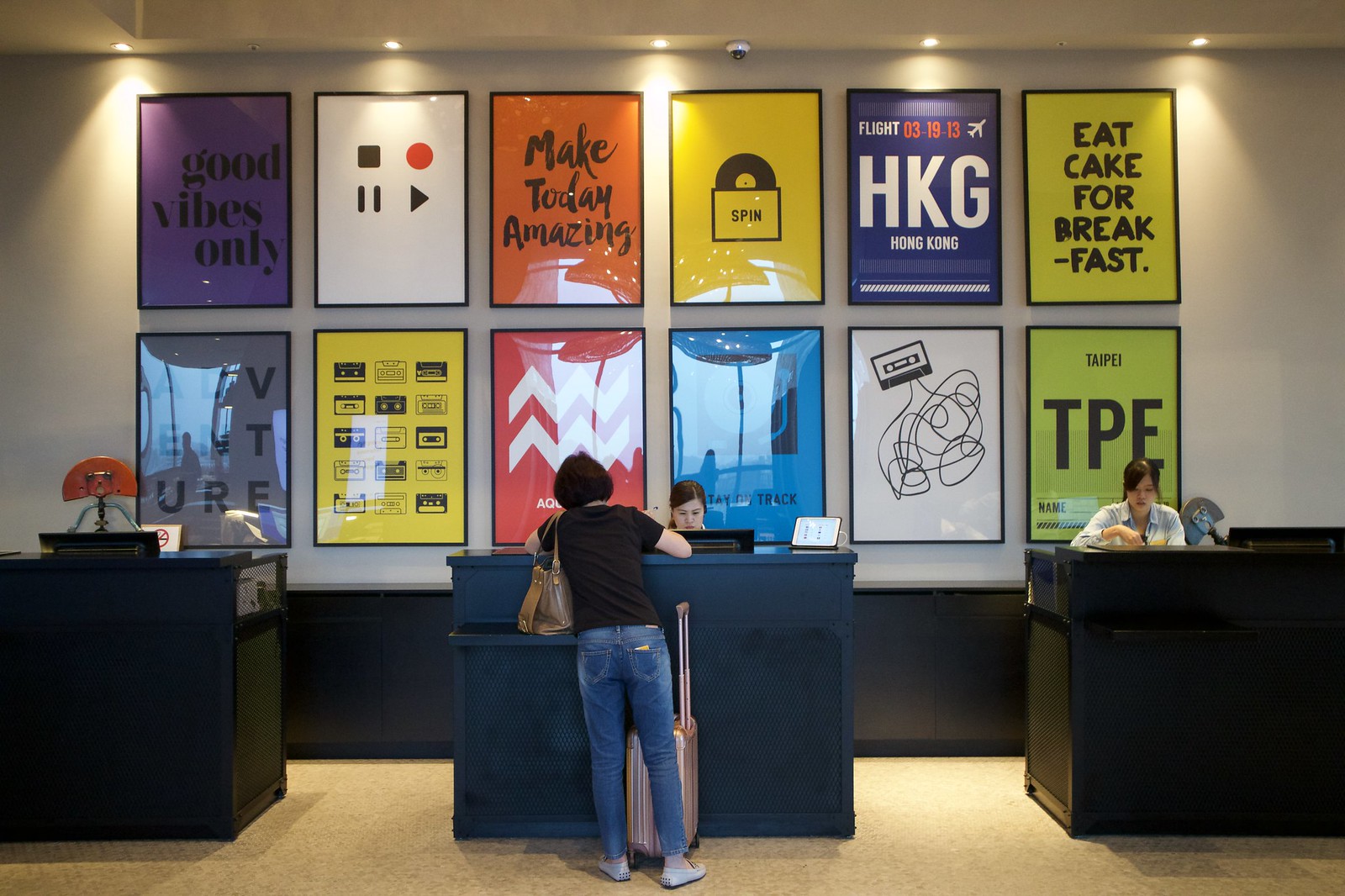 As soon as you walk out of the elevator on the 17th floor, you can see the reception with its’ colorful and artsy background. You can immediately see the hotel’s sleek, stylish and hip charm.

We were warmly greeted by the staff and even though we arrived rather early, our room was ready so we could check-in early! Next to the reception, there is also a lounge area with stylish lounge chairs, a ping-pong table converted into a working table and even a Foosball table! From the living area, you have a gorgeous 180 degrees view on Taipei 101. We were told that they hold a New Years Eve Party there, and they have an amazing view of the fireworks on New Years Eve. 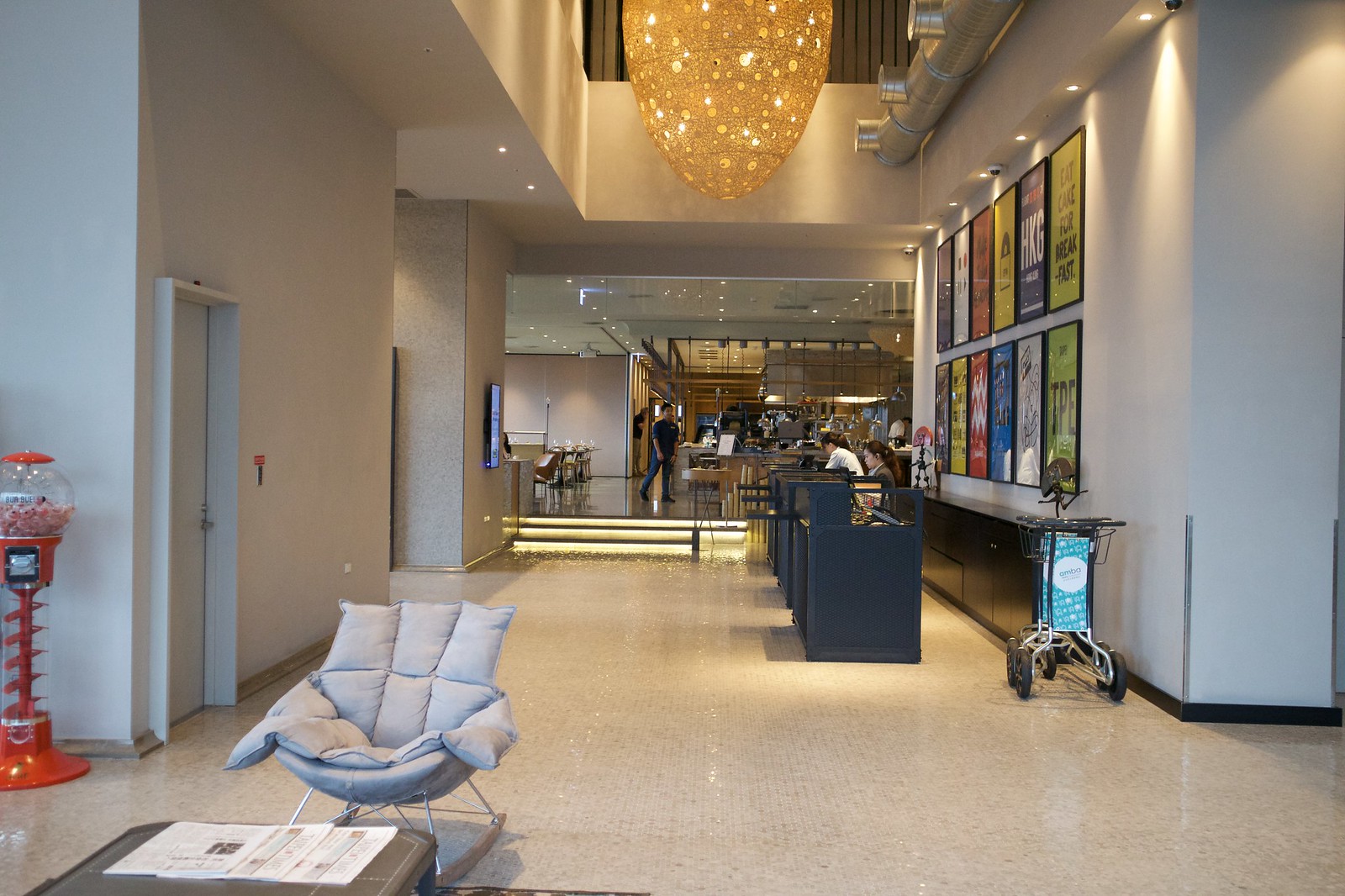 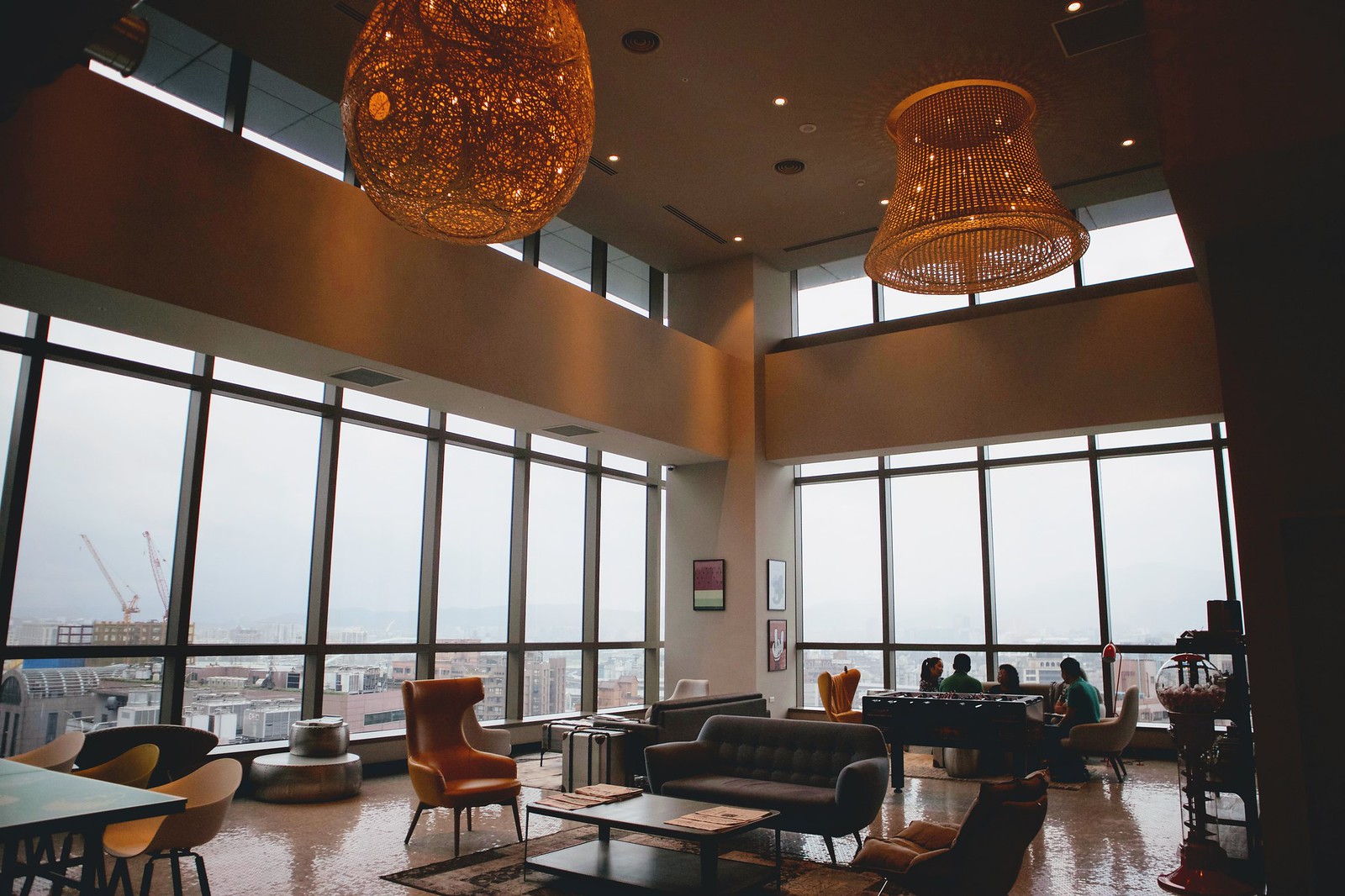 The style of the interior design can be described as minimal retro chic. A lot of the furniture and and artwork is actually designed and crafted by Taiwanese local artists. We loved the big lamps that were scattered in the lobby area and the restaurant. These lamps were each handcrafted by six local artists and it took them 14 days to make just one! 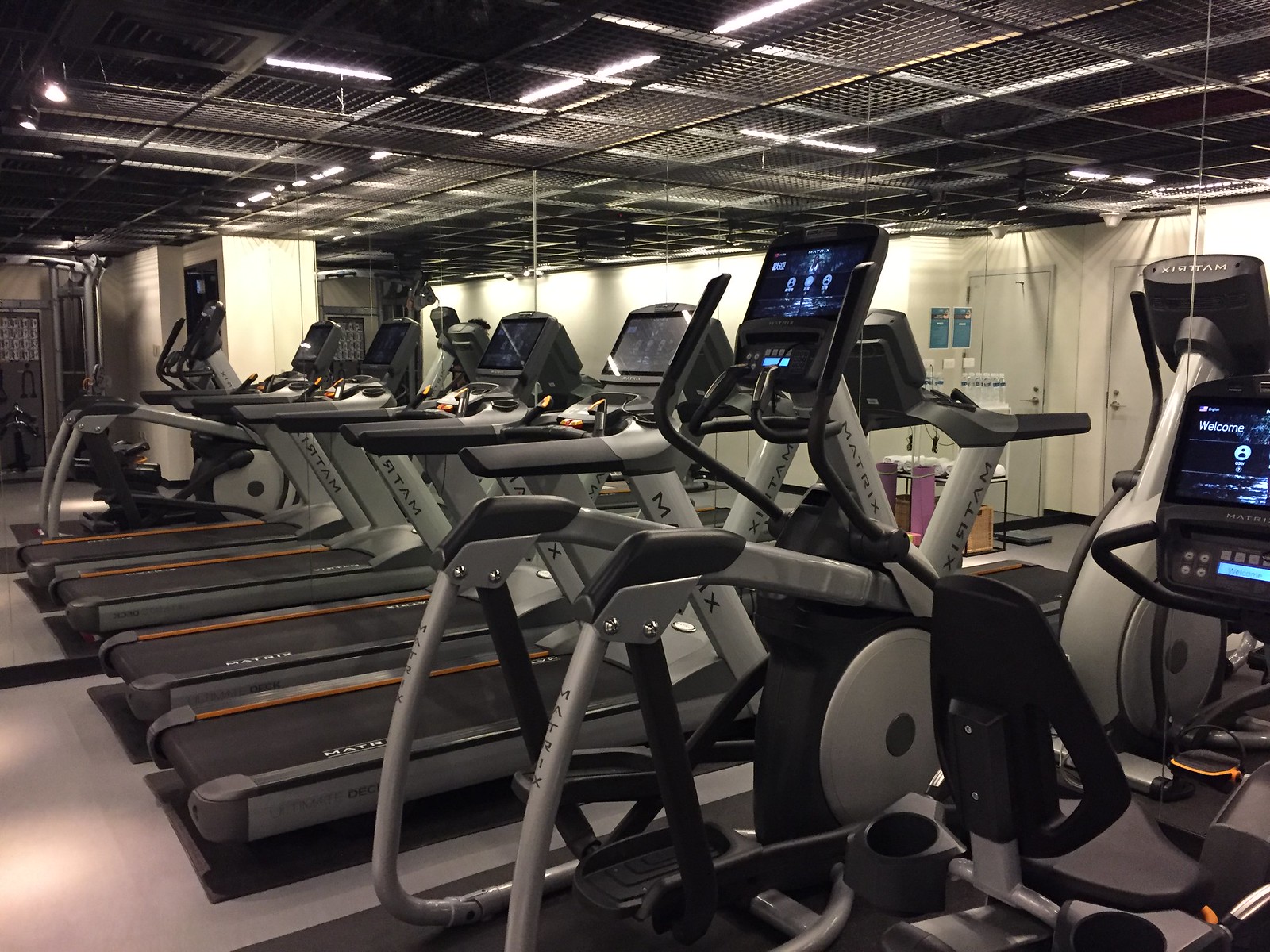 It’s really rare to find a hotel with a laundry room, but amba Taipei Hotel in Songshan has one with three sets of washer-dryer machines, and it’s all for free! That’s pretty handy if you ask me.

The gym is rather small but functional, and all the equipment is new. It would have been nice to have a view on the city though.

There is also a funky looking shuttle, that brings hotel guests to the Taipei 101 every hour or so. Definitely very handy!

We got a room that was facing the famous Taipei 101 building, which gave us an amazing view of the third largest building in the world! Apart from the view, the room was equipped with everything that a guest might need, including flip-flops that we could take home with us (the packaging even said “take me home”). It’s also super clean and neat, and the space is very open, as there is an open bathroom with separate shower and toilet, so if one is showering the other one can still go to the toilet. 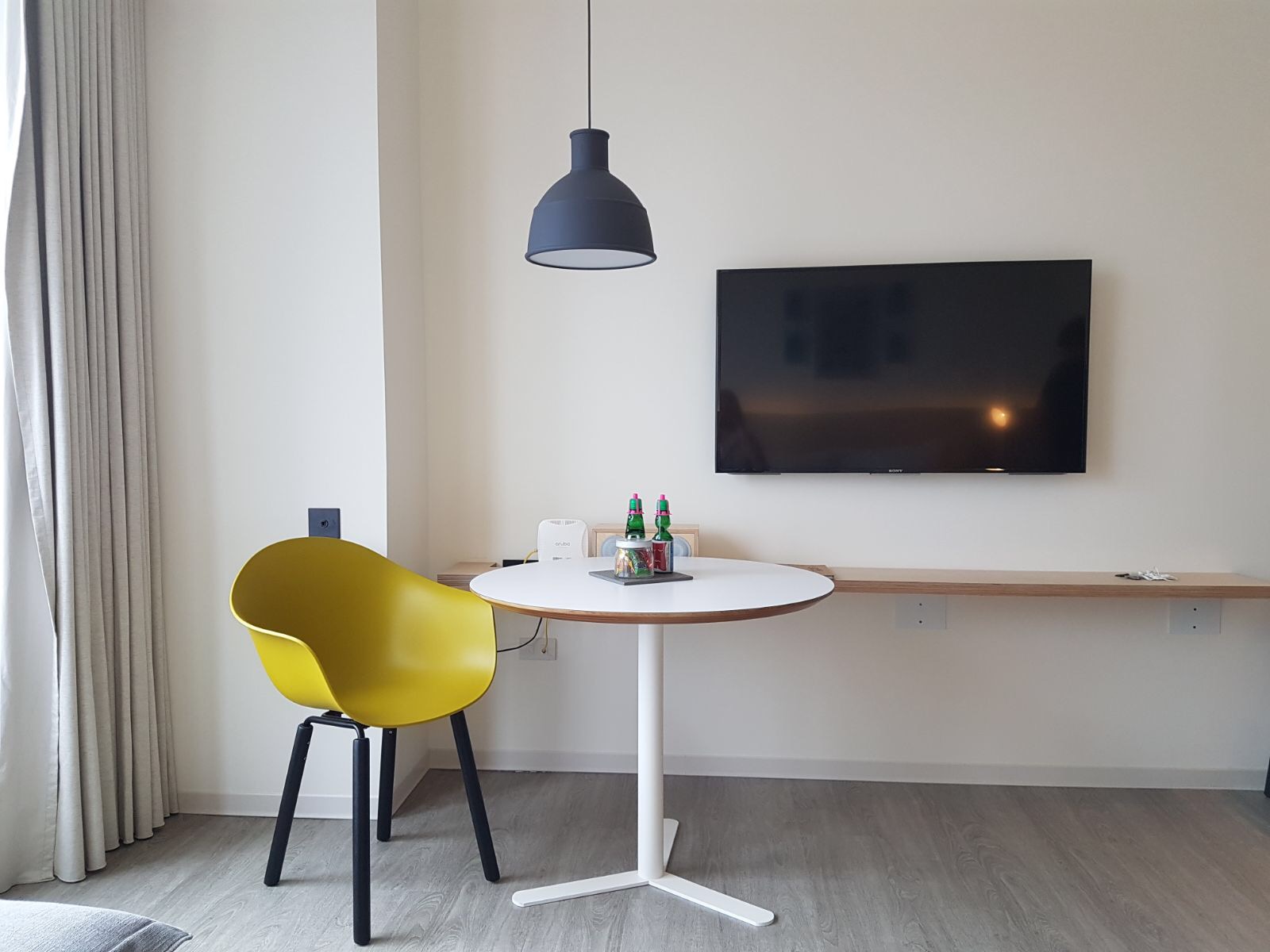 There is also a custom-made wireless music box in the room, which is super handy. The wifi is also super fast: when we tested it, it was around 100 mbps! Definitely a bonus point for us remote workers. We also found little local Taiwanese snacks in our room, as well as a Nespresso machine, water boiler and some local Oolong tea, which tasted amazing. 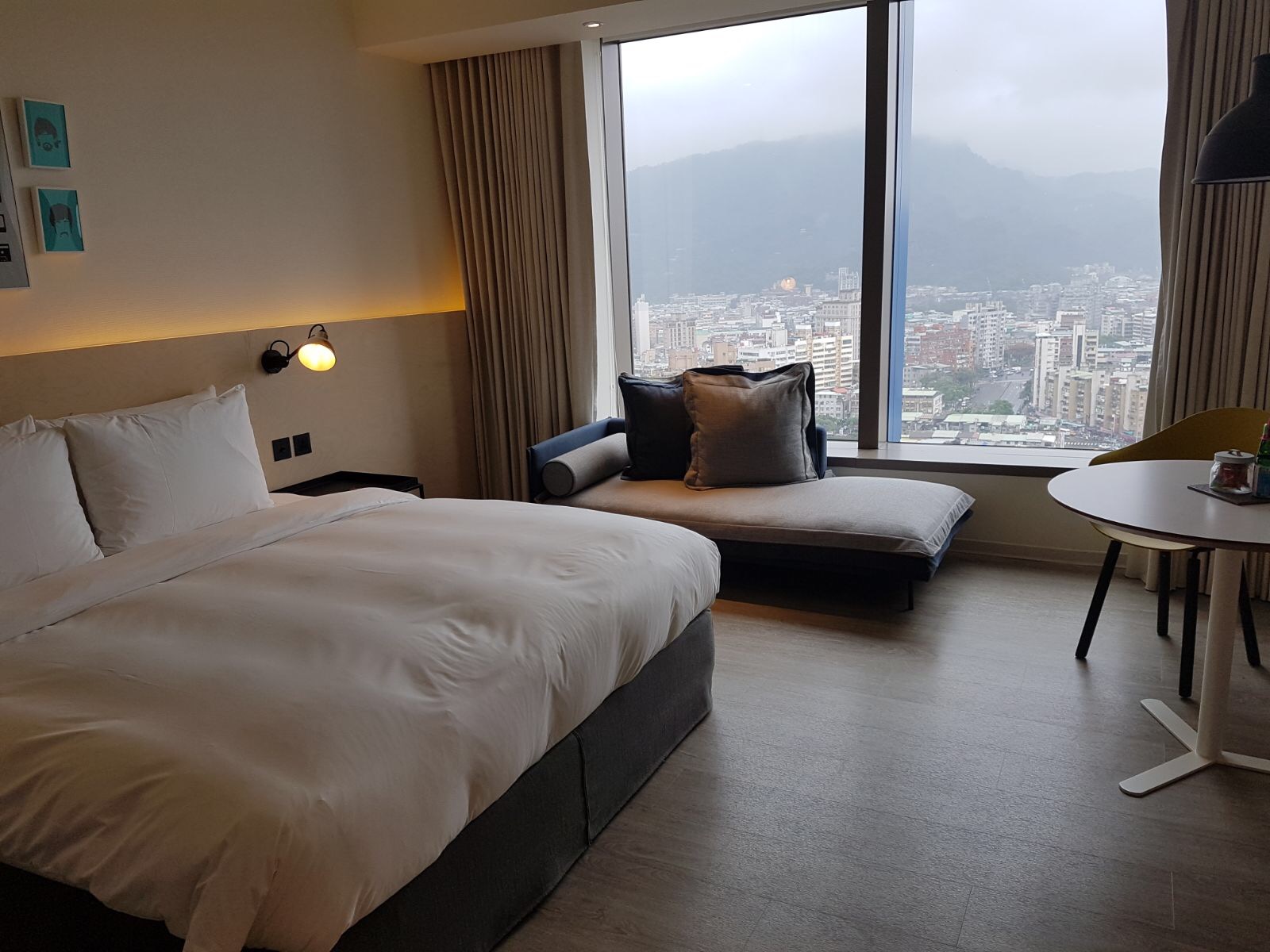 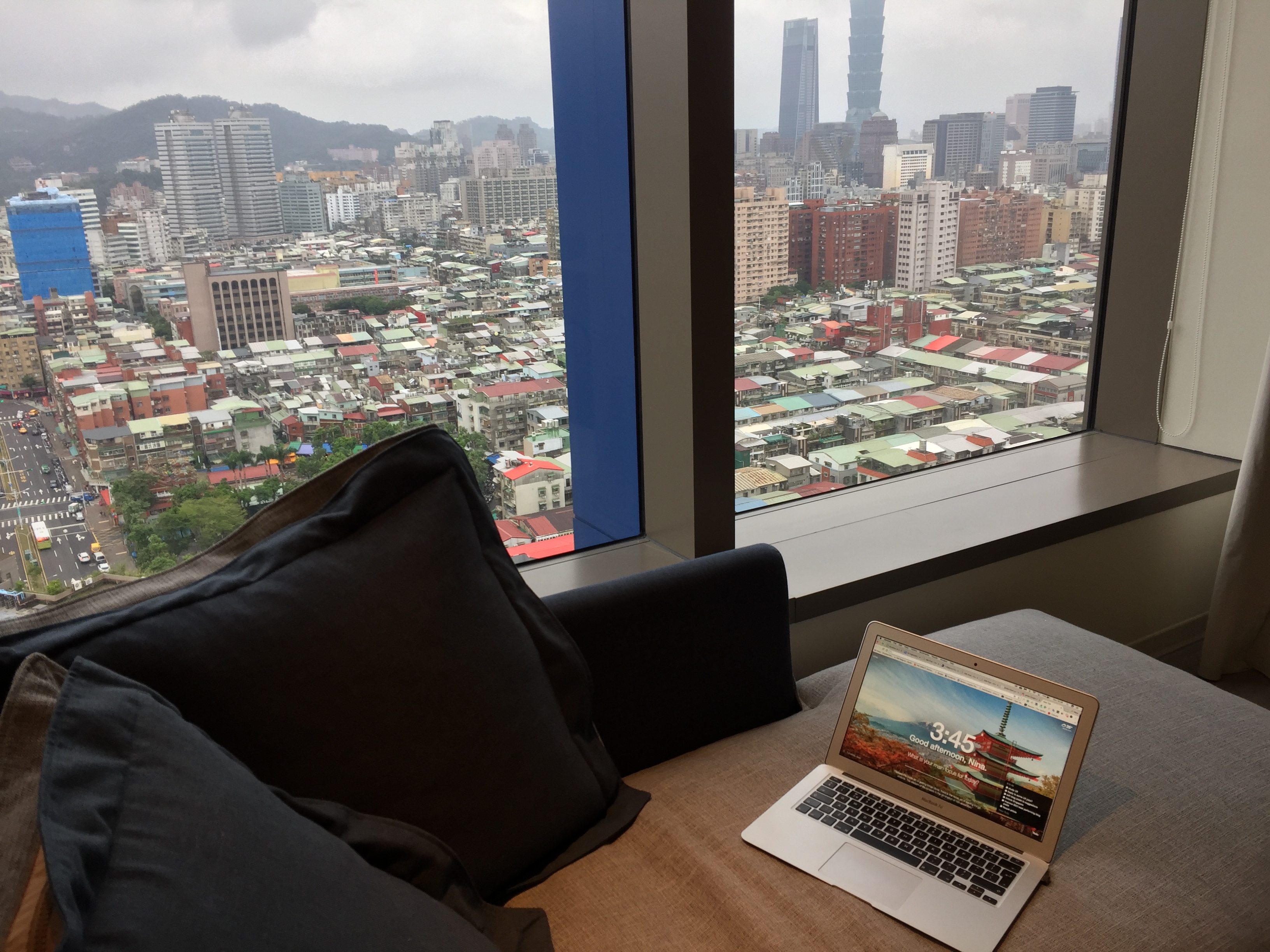 And don’t get me started on the heavenly bed! It was pure bliss sleeping on this big and fluffy bed. The pillows were made out of memory foam and the sheets were soft and fresh.

The toiletries were all naturally made and smelled wonderfully of ginger. The shampoo and conditioner felt quite luxurious, as well as the shower, which also had a rain shower; so relaxing! 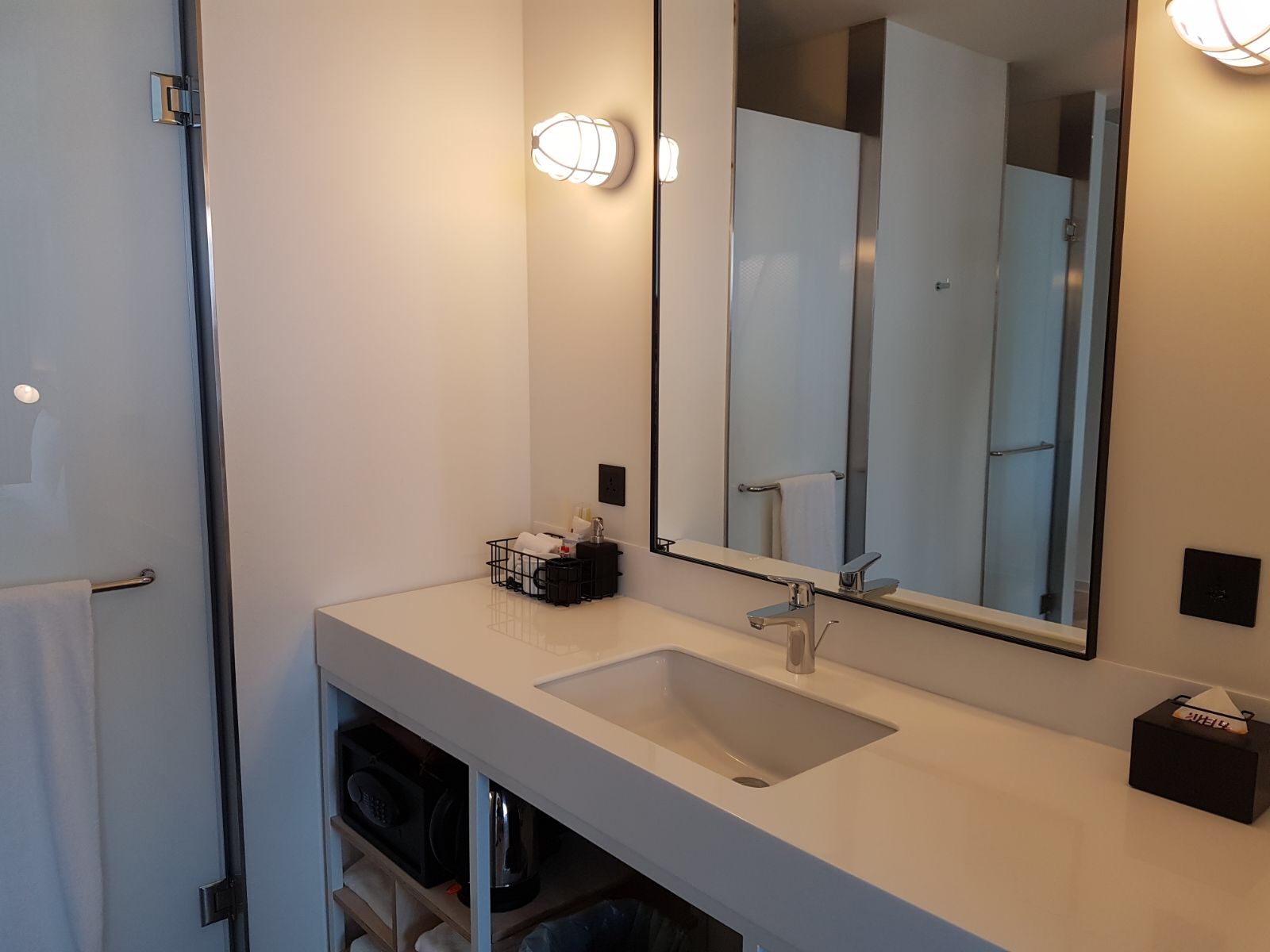 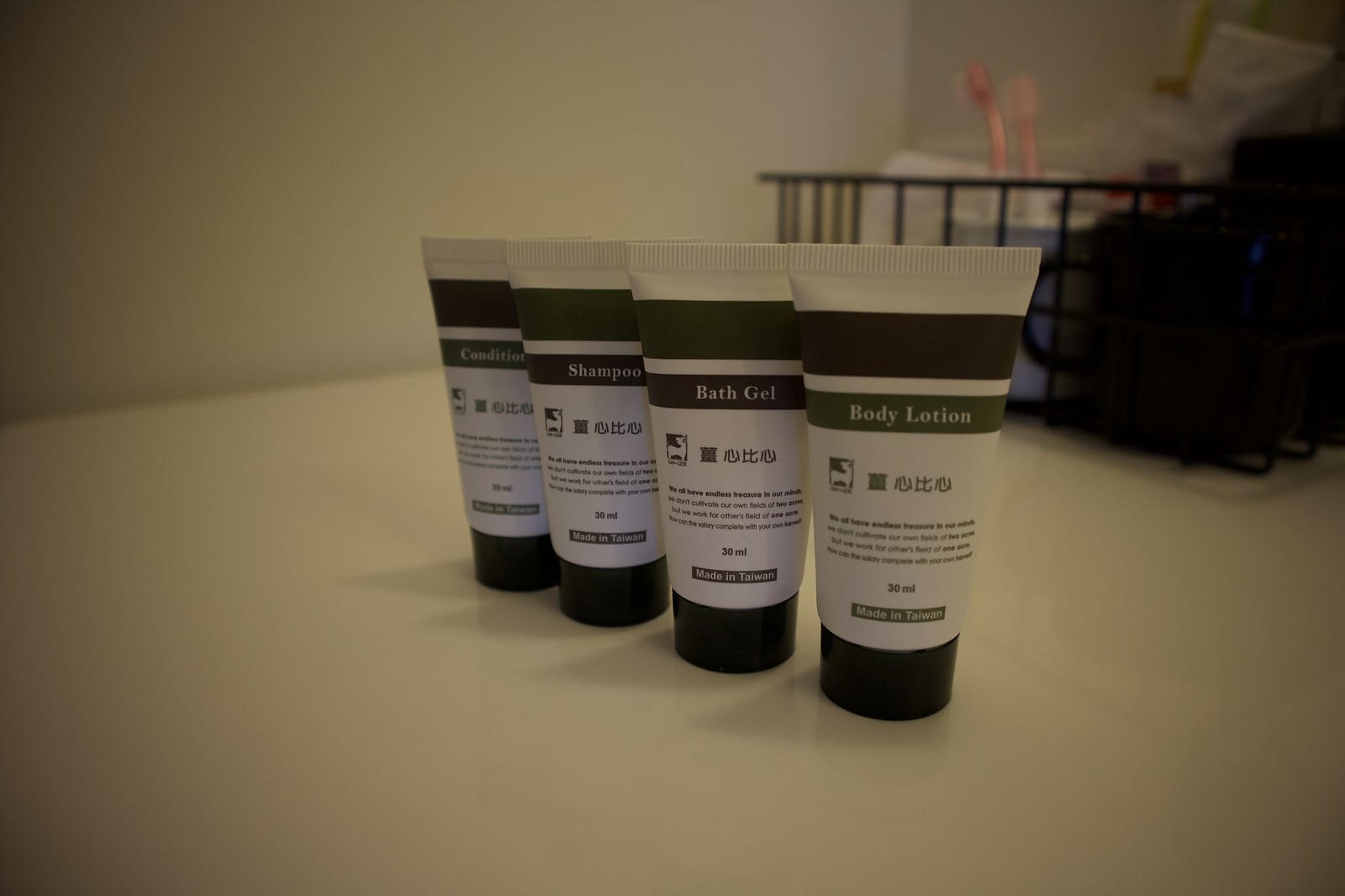 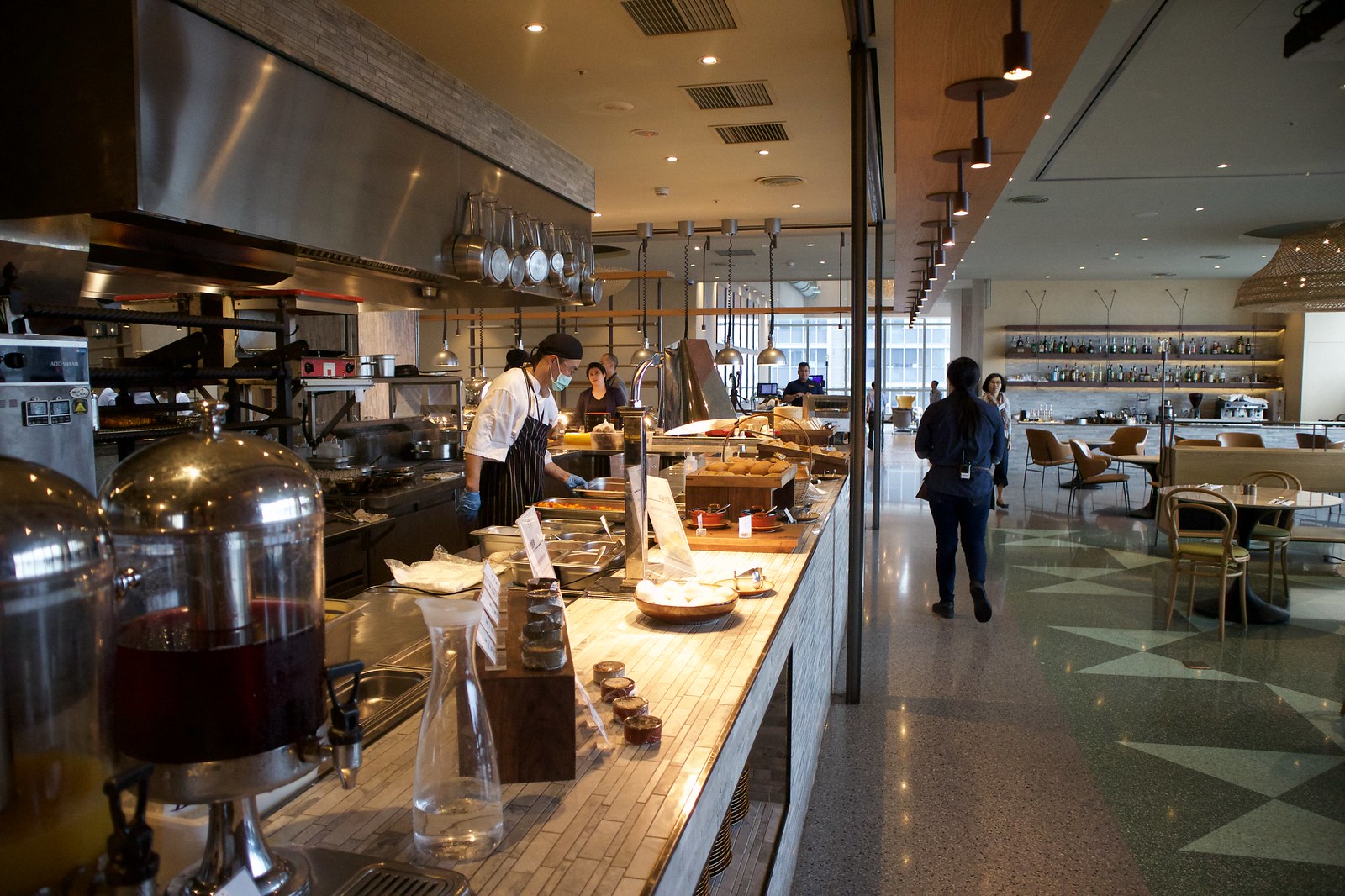 The breakfast buffet is served from 6:30am to 10am, and there is a selection of bread, western and Asian warm breakfast foods, dim sum, an egg station, cereals and yogurt and fresh fruit. Overall, it was quite alright, but nothing too special. For a 4 star hotel however, it’s definitely very decent. 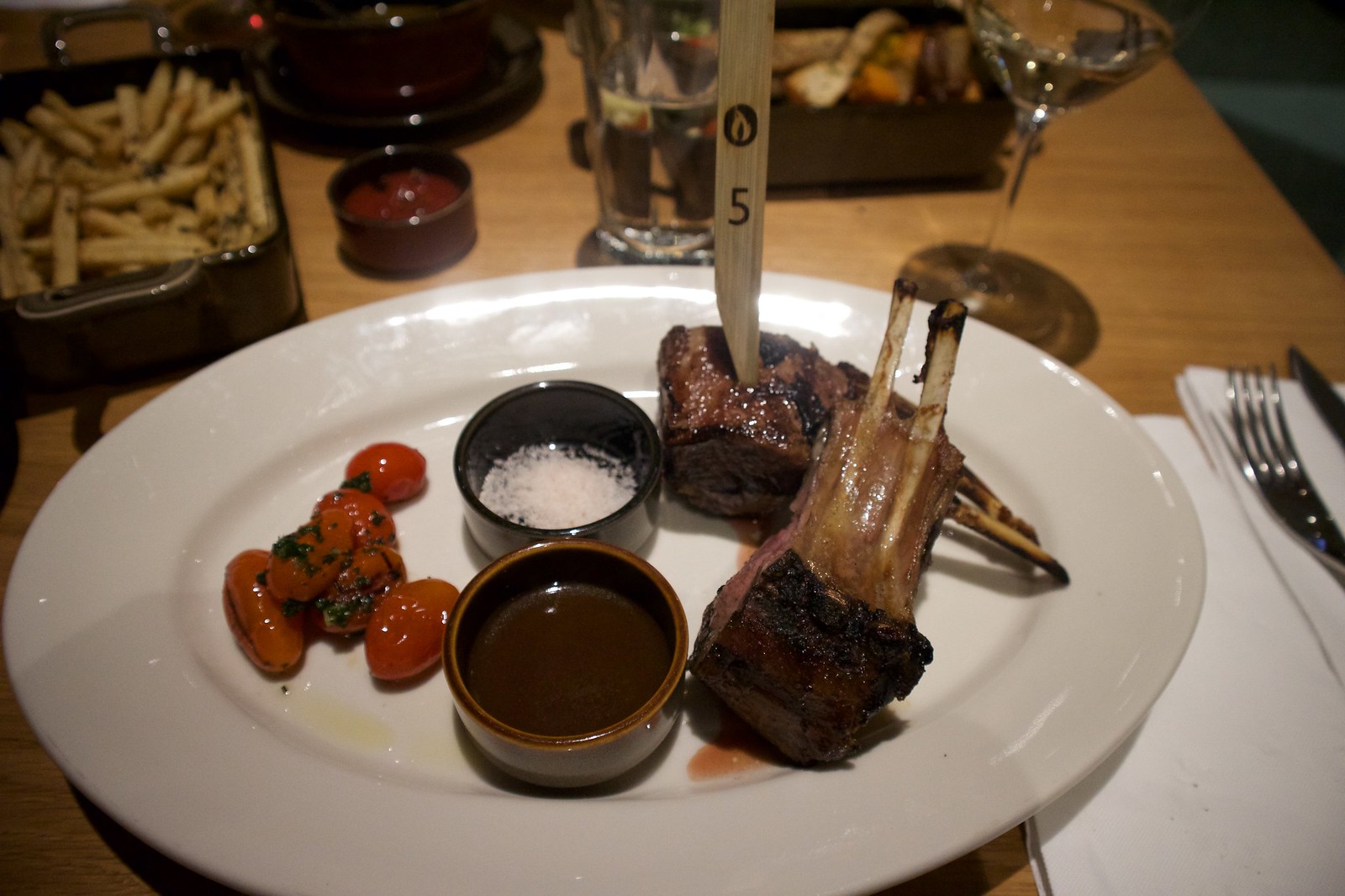 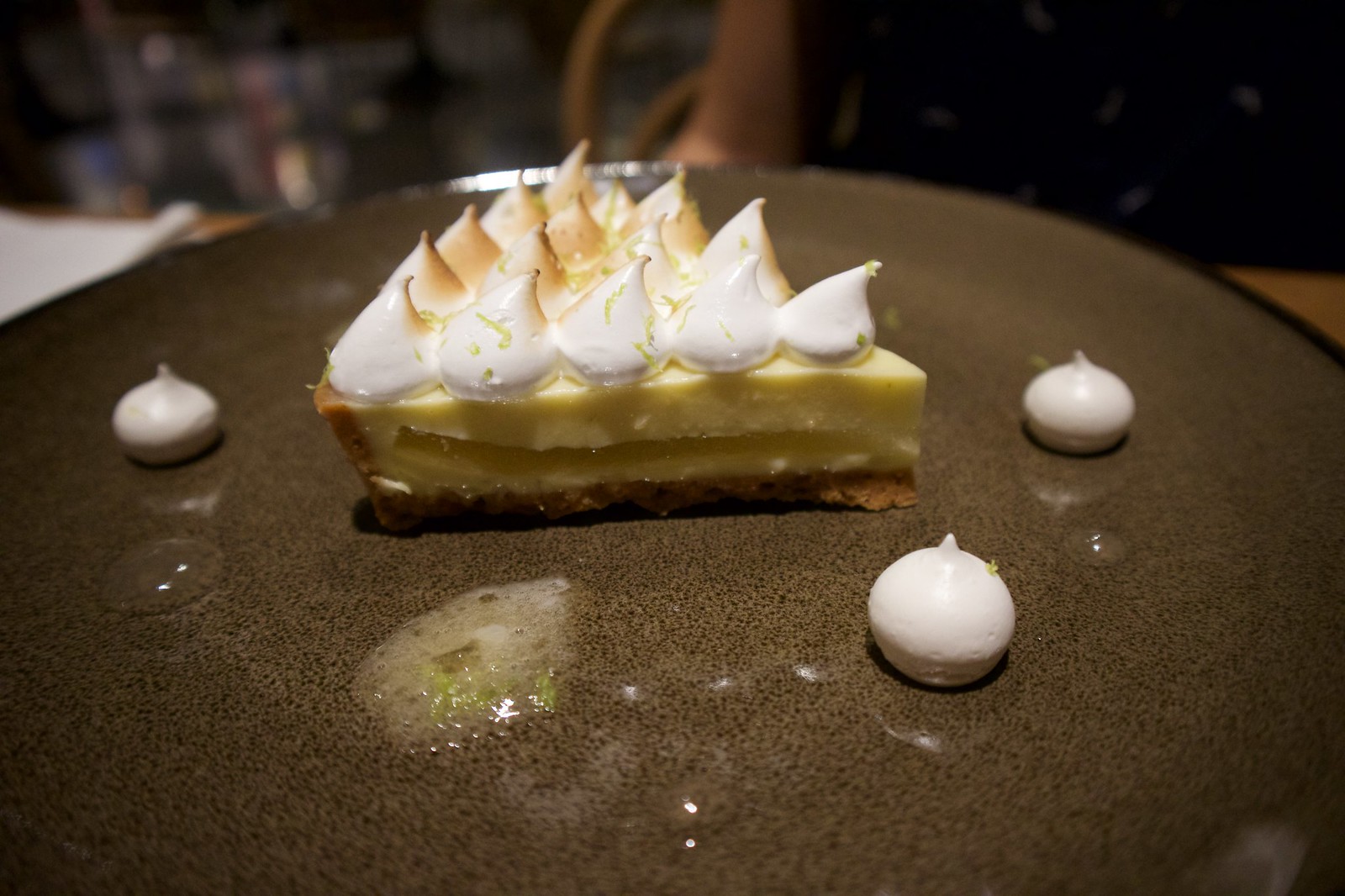 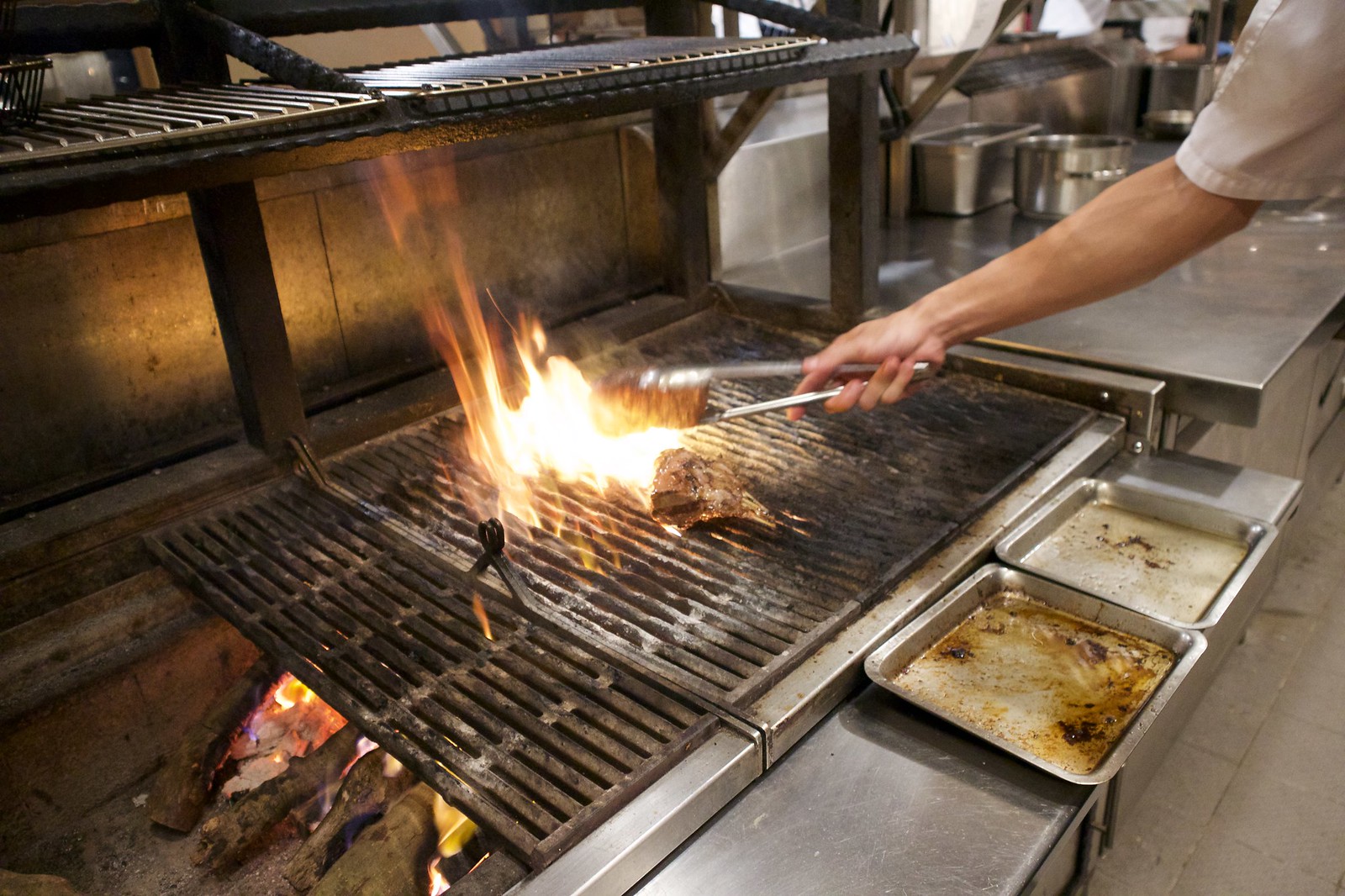 We had dinner at the Que restaurant, and it was absolutely amazing! Que Restaurant is a wood grill steak restaurant, and they char the meat on a wood grill. As it’s an open kitchen, we had the opportunity to see the cook in action charring the meat. Definitely really cool to see!

We had a set dinner which was a 4-course meal, and it was really, really good. Highlights were the warm and crunchy walnut bread, the truffle fries, the scallops, and of course the meat! It just melted on our tongues, and the char of the wood grill just gave a whole other dimension to the taste. I really recommend this place for dinner!

The service at amba Taipei Songshan was excellent, and everyone was always kind and friendly. Both check-in and check-out went super smoothly and we also had a fun hotel tour with Jeanie, the Chief Alignment Officer, in which we discovered the hotels’ intricate and fun details. Even though not all the staff spoke that well English, they always went out of their way to help us. 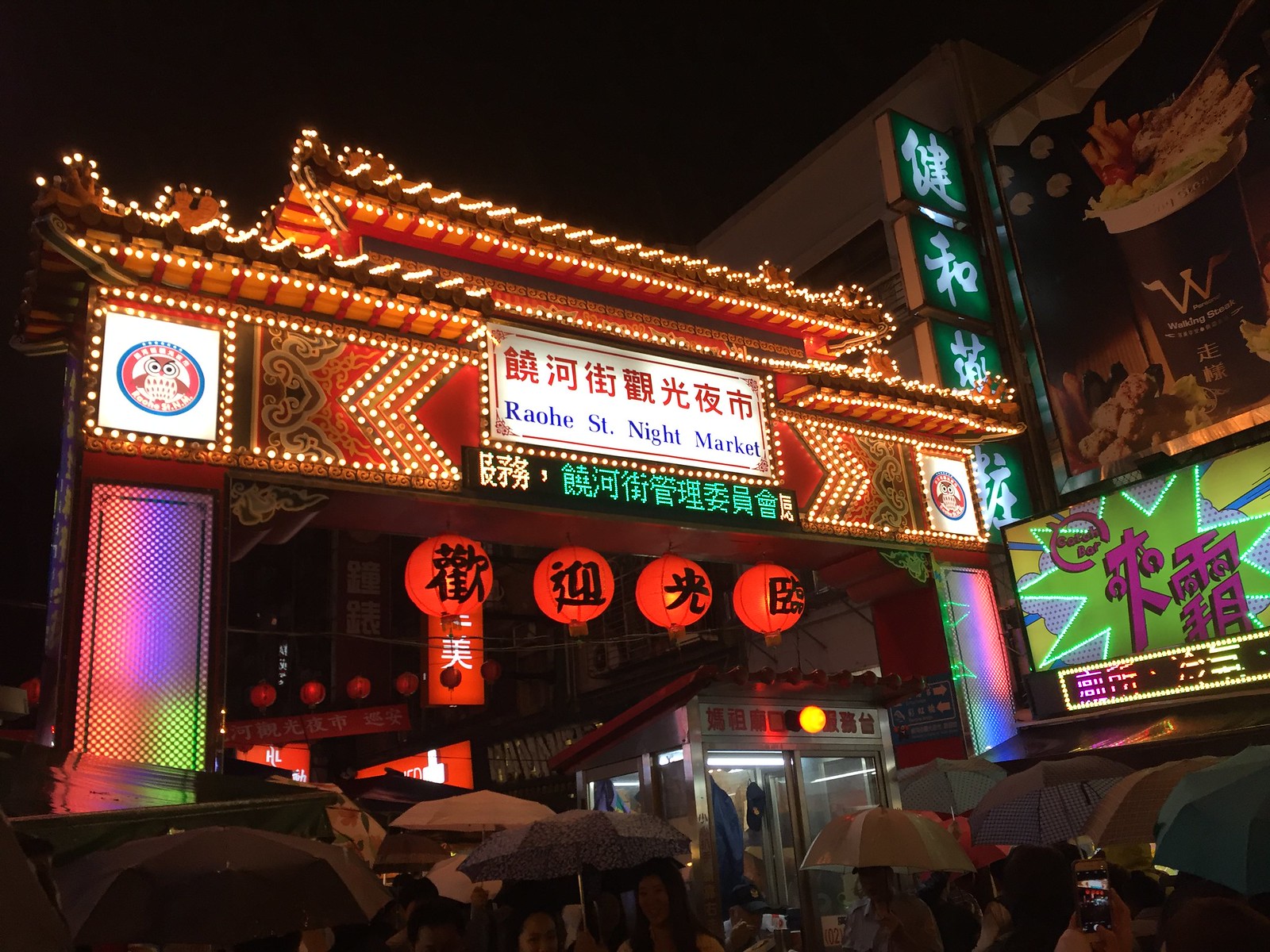 Amba Taipei Songshan Hotel is situated in the eastern part of the city, and close to the Raohe Night Market, Wu Fen Pu Garment Market and the Rainbow Bridge.

It’s a really nice area, and close to main attractions like the Taipei 101, Elephant Mountain among other attractions. There is also a metro and train station right next to the hotel, which makes it easily accessible. Next to the hotel is a small shopping center which has a few dining options as well. The shopping mall is directly connected to the hotel, so very convenient if it’s raining and you don’t want to get wet!

All in all, it was an amazing stay at amba Hotel, we loved every minute of it! We will definitely be staying there again if we come back to Taipei. 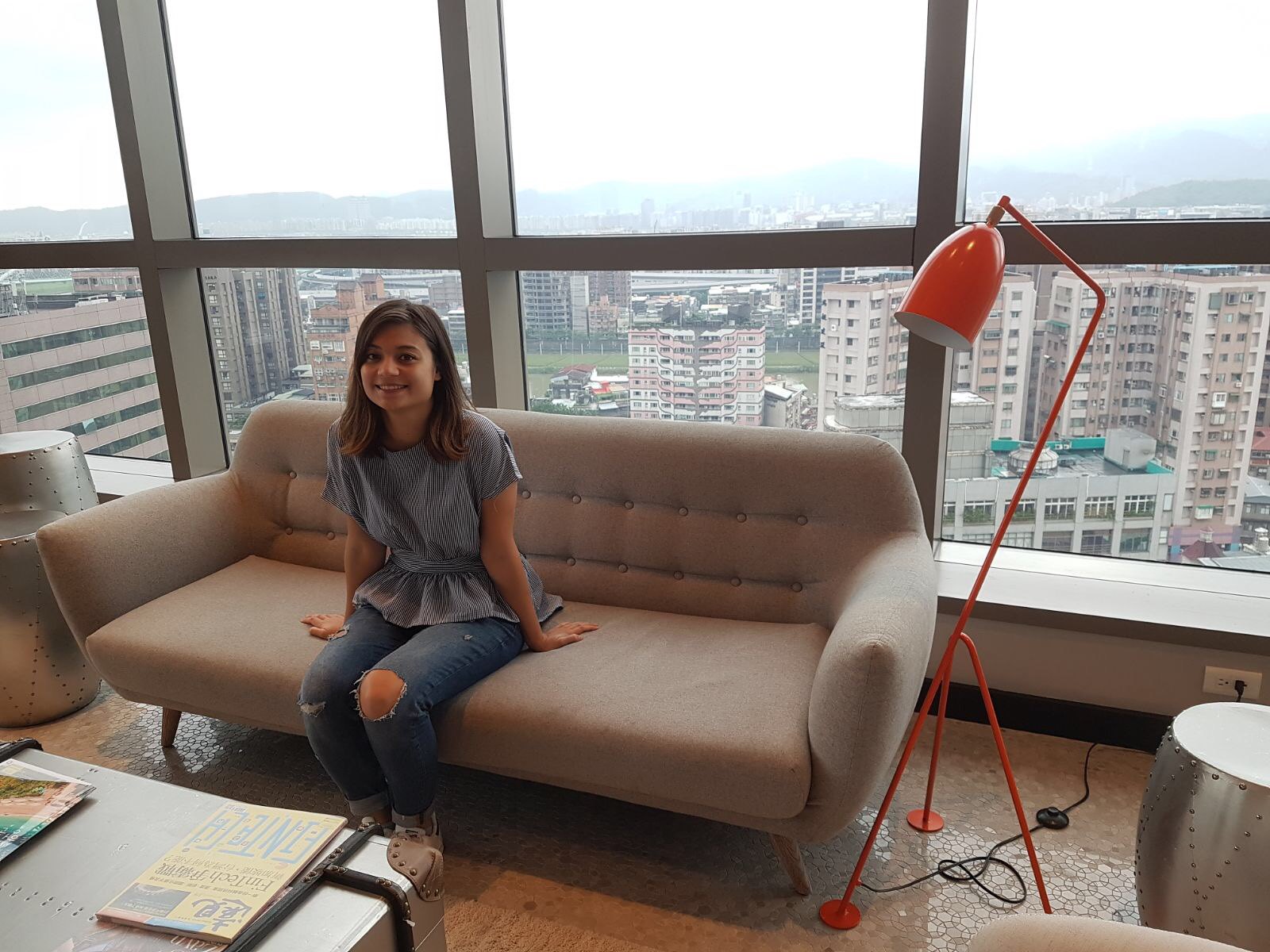 This post is a collaboration with amba Taipei Songshan Hotel. Everything that I wrote is a truthful account of our experience at this hotel. 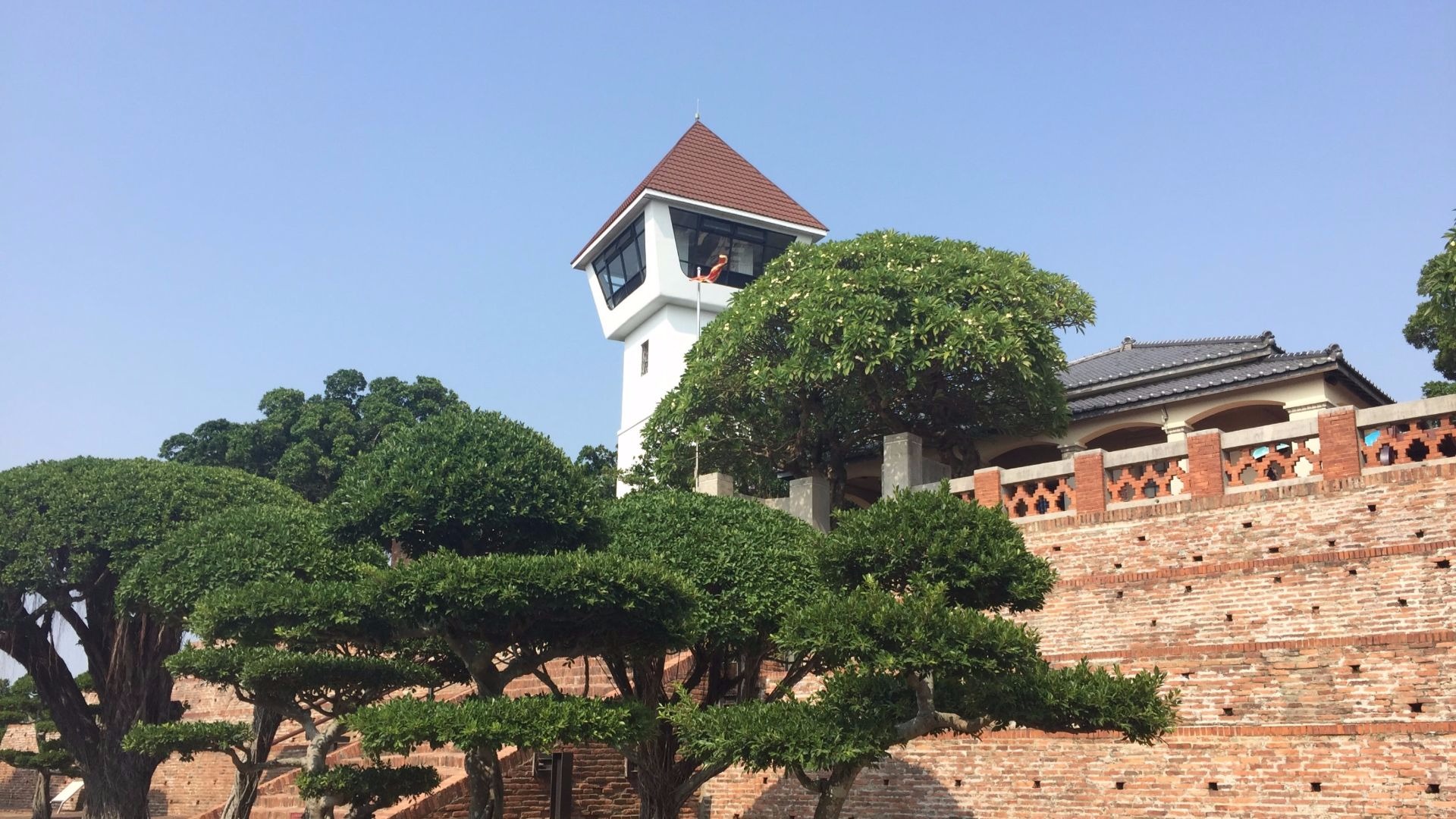 One Day in Tainan: Things To Do, See & EatTaiwan, Travel 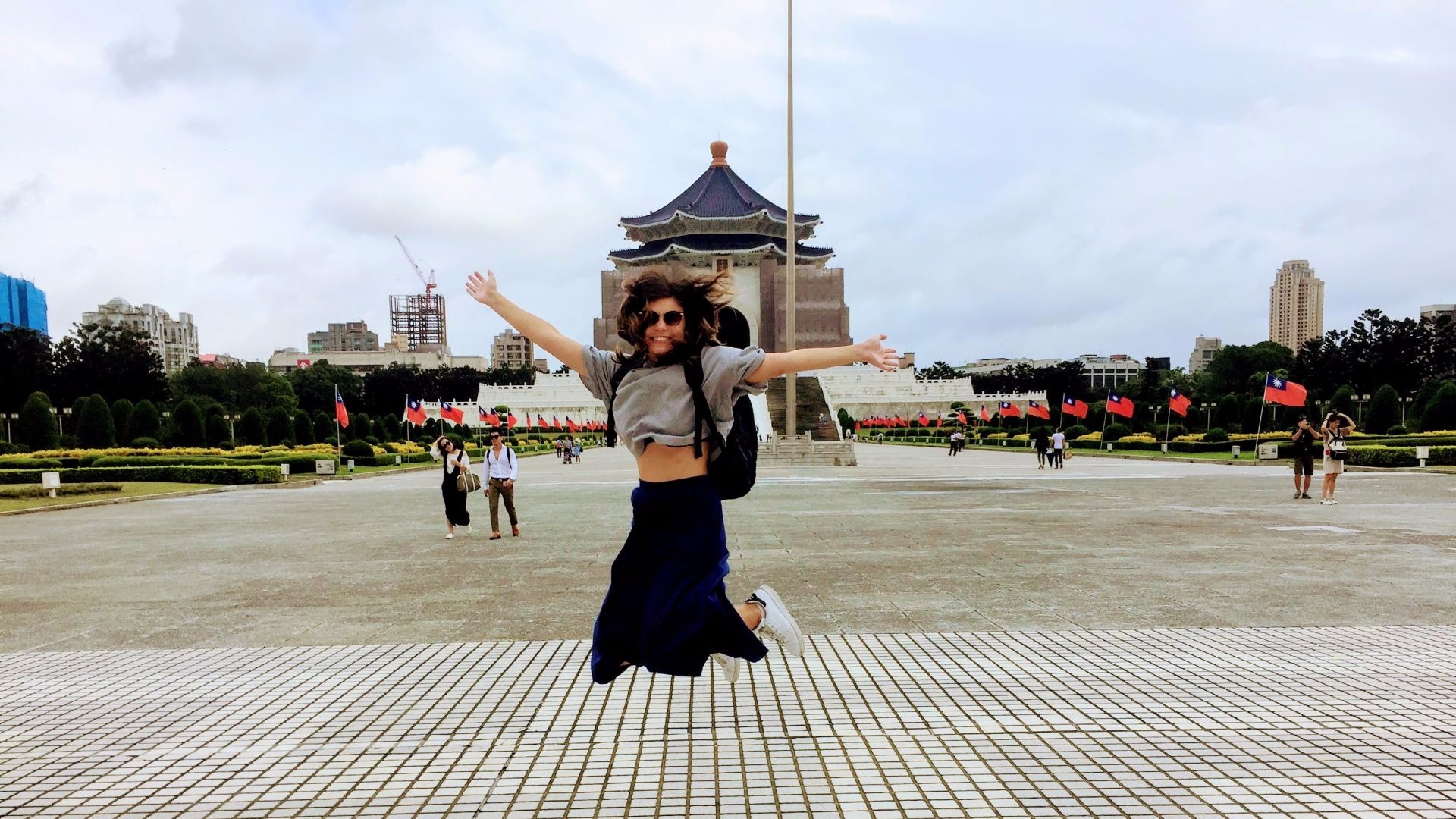 5 Days in Taipei, Taiwan: What To Do, See & EatTaiwan, Travel