The Blue & Green Troia Design Hotel is located a short ferry ride away from the charming little Portuguese town of Setúbal, which is about half an hour ride from Lisbon.

We stayed here for five nights, during our trip to Portugal in June 2018 and overall we enjoyed it very much, however, we wouldn’t return to this particular hotel. I truly think this is more of a 4-star hotel rather than a 5 star one, and the price is way too high for what you get.

Read below my review and find out what we liked and what we didn’t like! 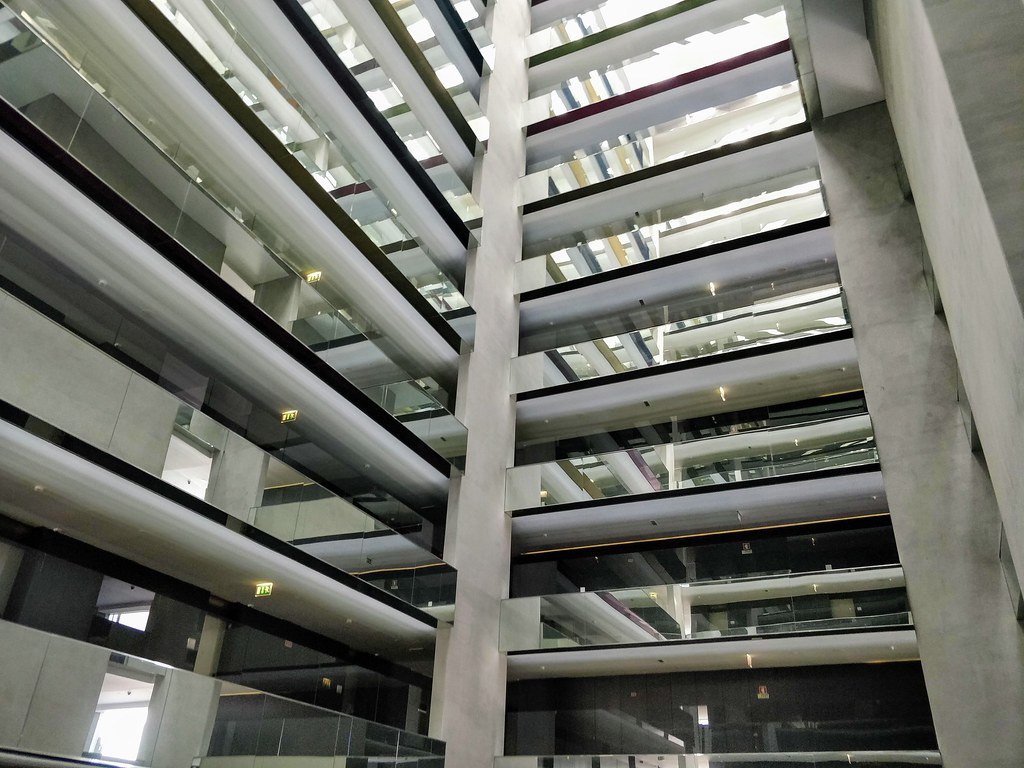 The Blue & Green Troia Design hotel is quite big with slightly more than 200 rooms available. There is also a congress center located next to the hotel as well as a casino. There are many company events that take place here during the year. In fact, during the first two days we stayed here, there was a big group of employees from a Spanish company staying here as well. 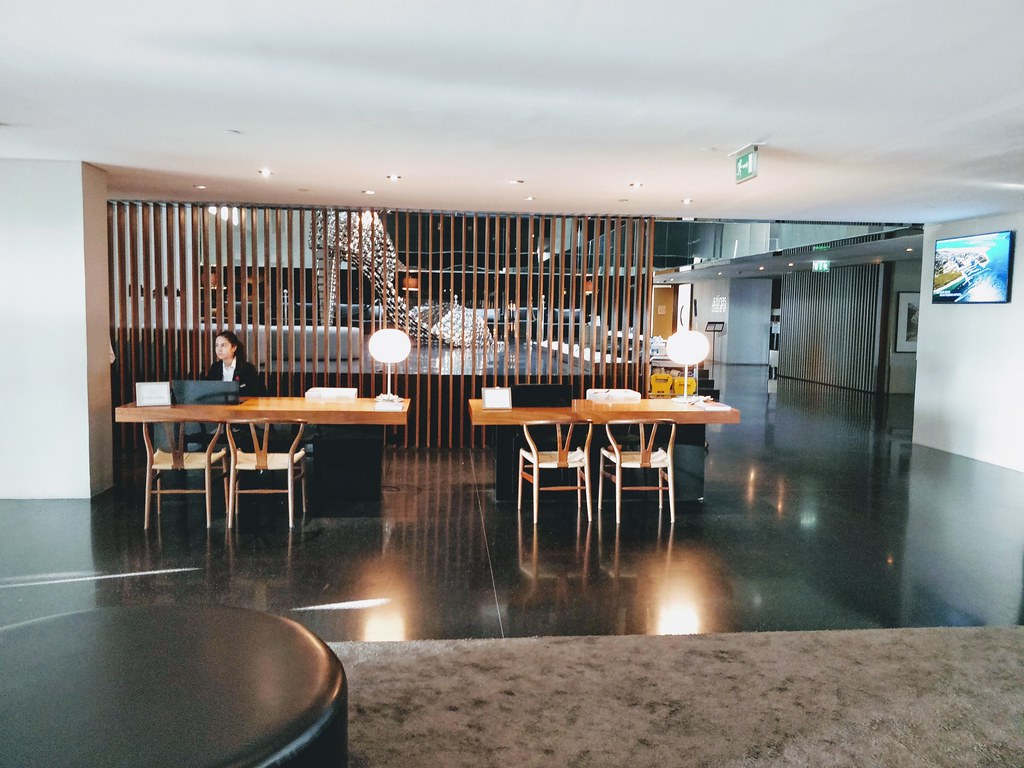 There is no grand luxury hotel entrance, instead, we were greeted by a modern and clean reception area. Just next to the reception area, there is quite a big lounge area with black leather chairs and also a huge high heel made of pans … Yes, you read it correctly, pans. Certainly a very interesting piece of art! 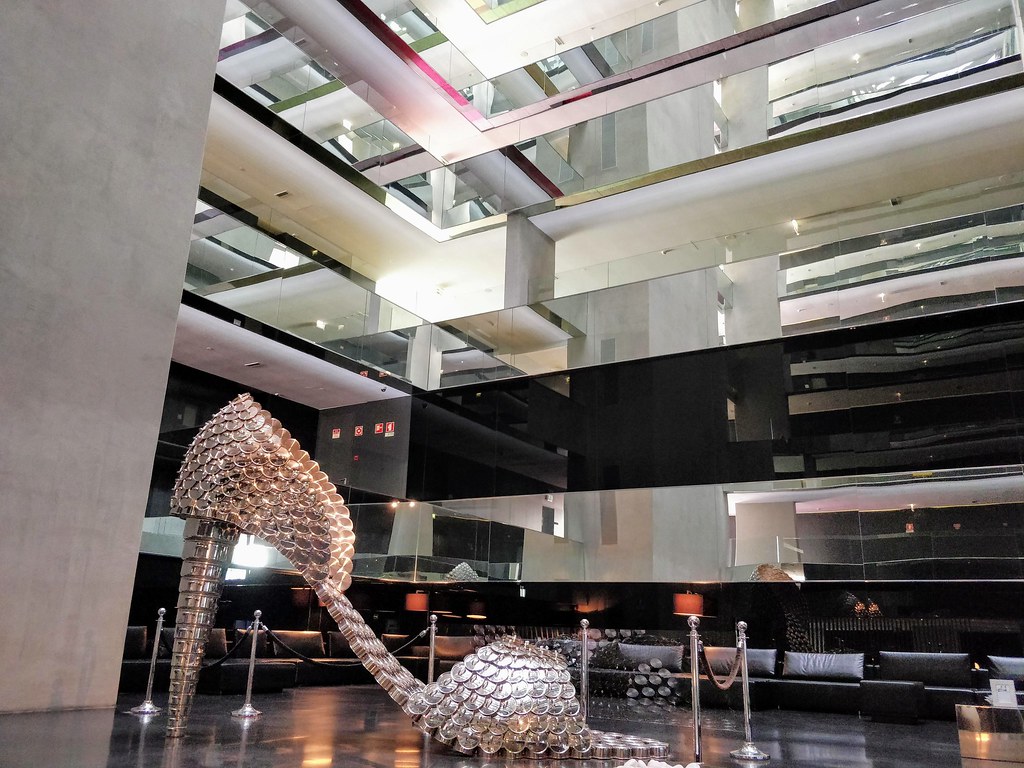 The interior design of the hotel I would describe as simplistically modern. Although to be very honest, I don’t really understand why they called it a Design Hotel, because I wouldn’t describe it as outlandishly decorated. Also, the breakfast hall is painfully plain, almost like a hospital canteen. 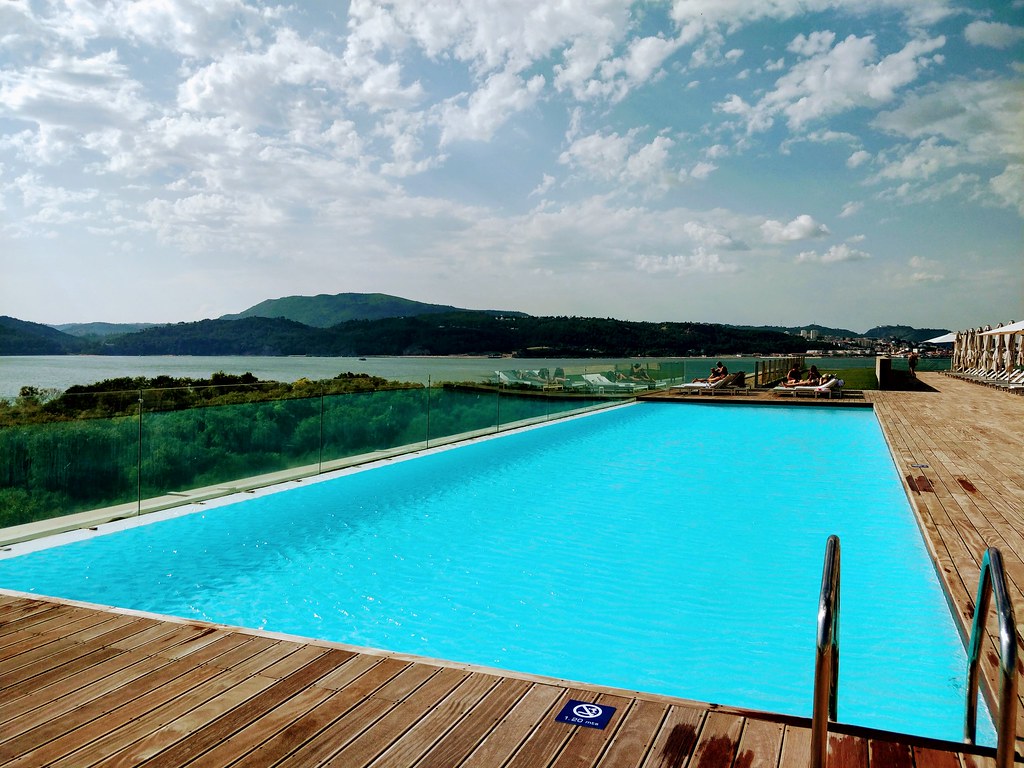 The pool deck is located on the third floor and offers an amazing view of the bay of Troia. if you’re lucky, you might even see dolphins jumping around! It’s a pretty big deck, and there are a lot of lounge chairs with enough space between them, so it never feels busy or cramped.
The pool itself is big, although it’s slightly cold, but perhaps that’s just because we are very fuss about cold water! 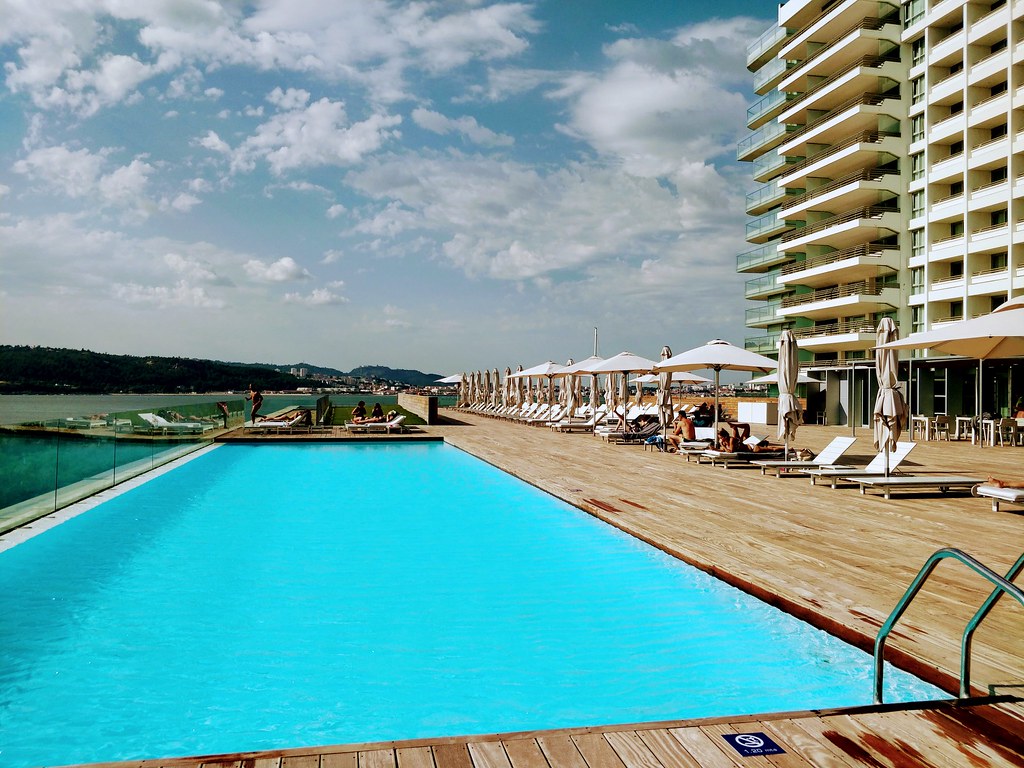 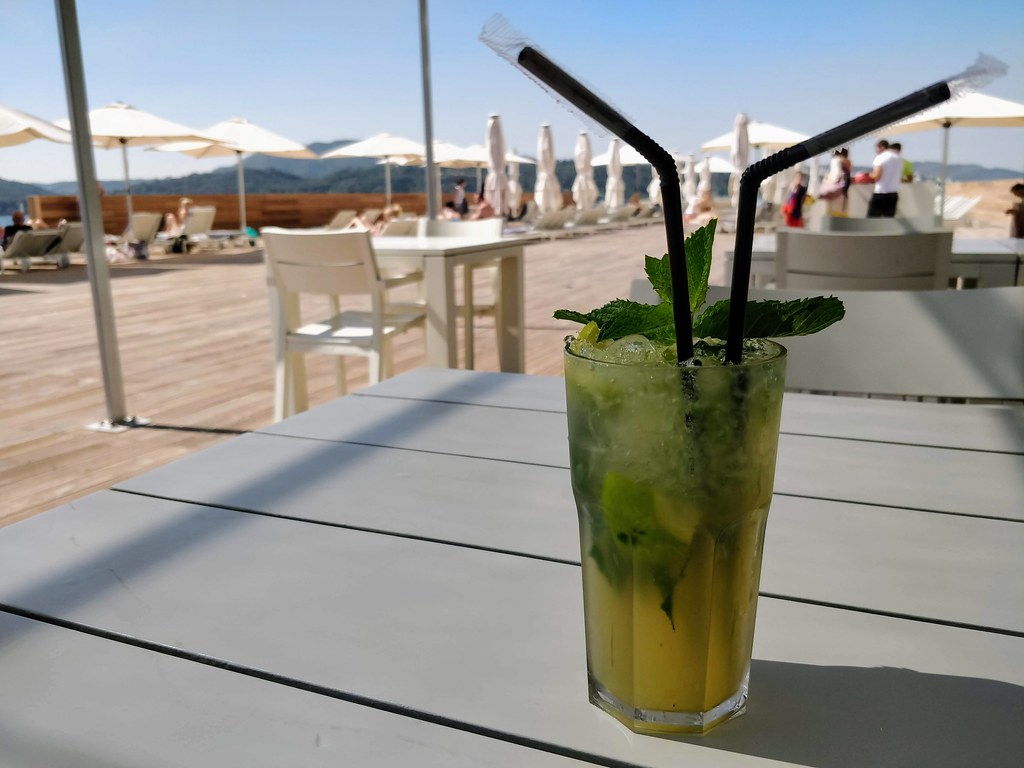 There is also an indoor pool for the winter. I had a quick look, but didn’t like it much as it really didn’t look like a 5-star hotel indoor pool,  just a plain indoor pool with plastic chairs around it. 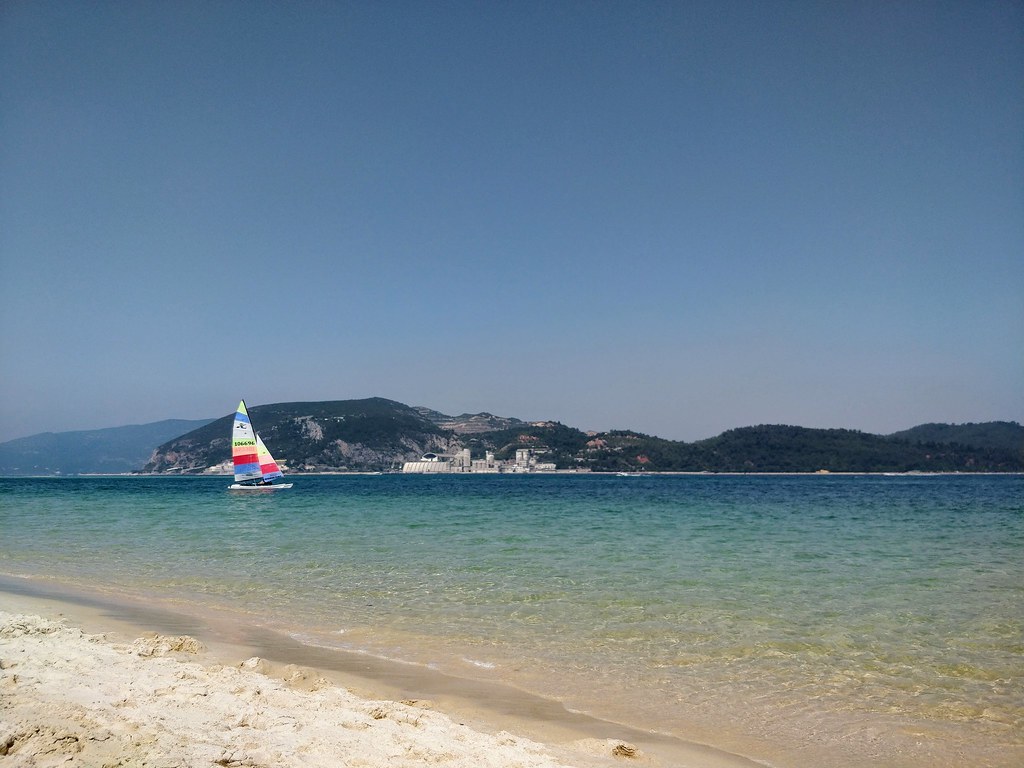 The beach is just a 5-minute walk from the hotel. The Troia beach is definitely one of the highlights here, the sand is white and soft, the water multiple shades of blue and turquoise, and exceptionally clear. The only thing is the temperature of the water… It’s absolutely freezing! Which is not strange, as it is the Atlantic Ocean. Just a bit of a bummer when the water looks so inviting but it’s so difficult to get in! 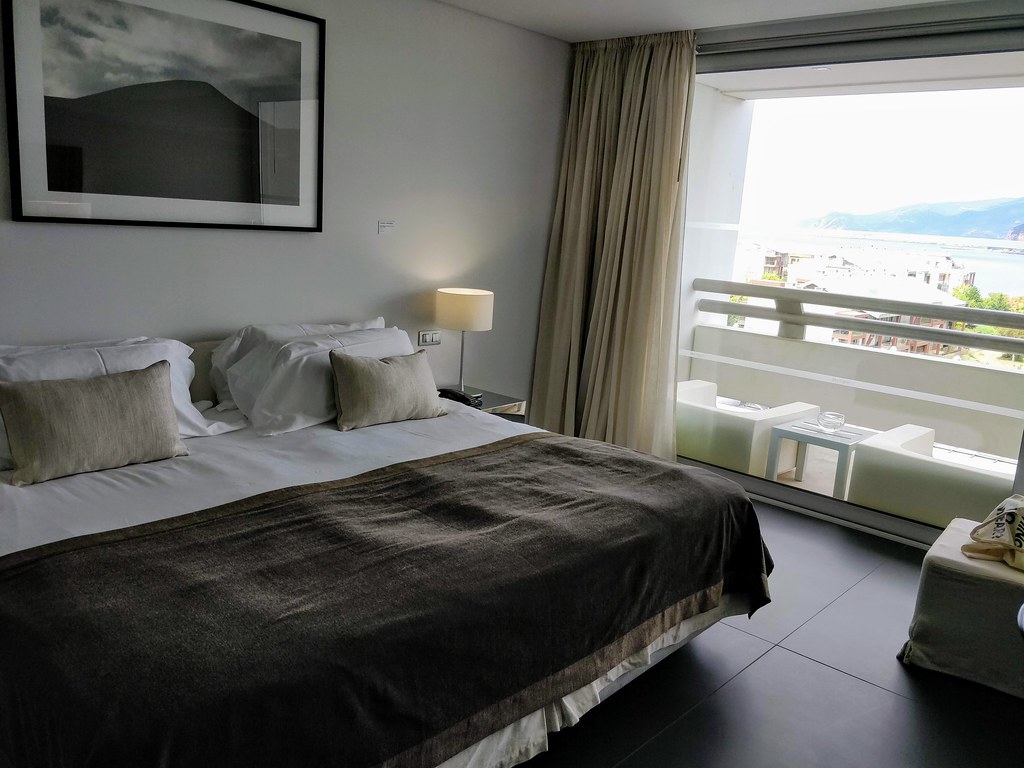 We stayed in two rooms in total, as we asked to change rooms since we were not so happy with the first room we got, though as the hotel was fully booked in the weekend, we could only change rooms after 3 nights.

The first room we stayed at was very big, including a very big bed which was super comfy!
However, I thought the room was very simple – not a hotel room you would expect from a hotel that calls itself a ‘design hotel’. For example, there was no decoration hanging on the walls whatsoever, which gave the room a very bare look and feel, especially because it was such a big room. Additionally, the couch in our room looked worn out and rather plain. 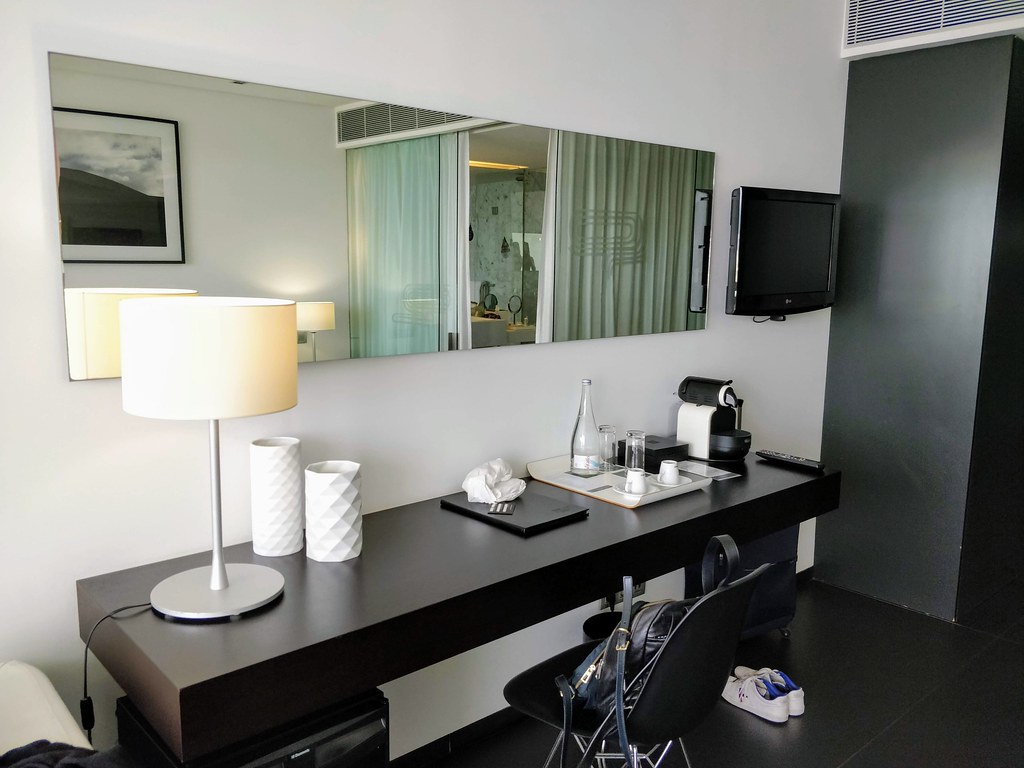 The second room we stayed at looked much better, even though it was smaller than the other room: we had a gorgeous view and there were more decorations in the room. (The pictures here are from the second room)

The bathroom is pretty big as well, including a big bathtub. There was also a Nespresso machine with three free capsules a day, as well as a bottle of water. Every night, we also got some chocolate in our room, which was a nice little touch! 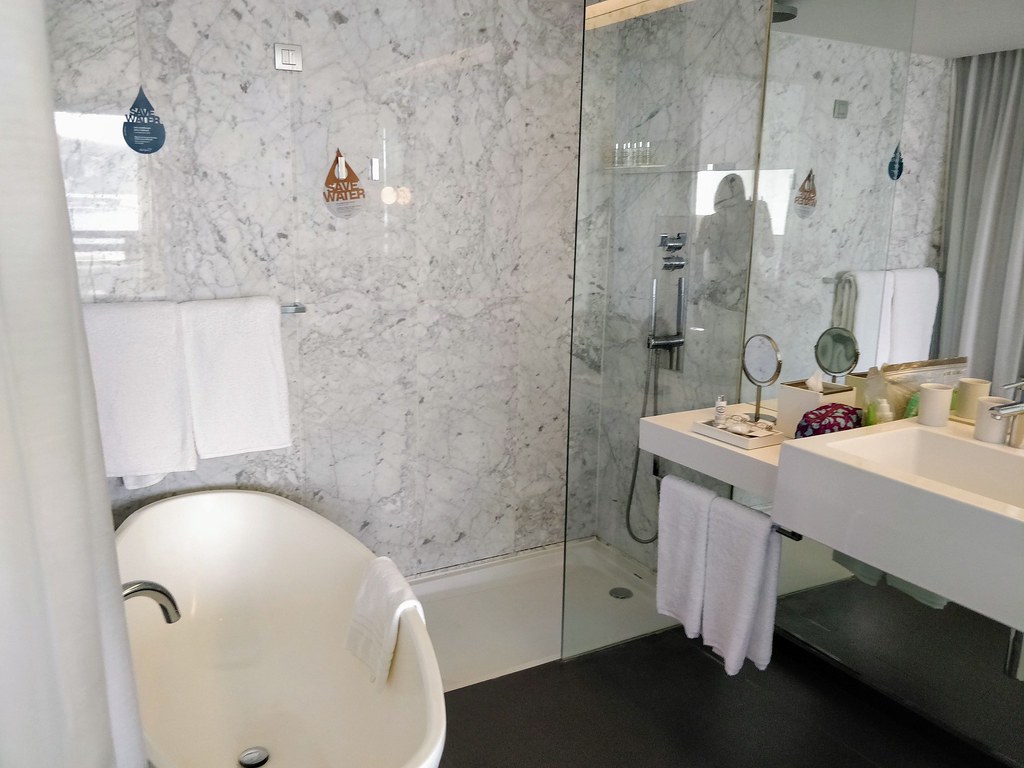 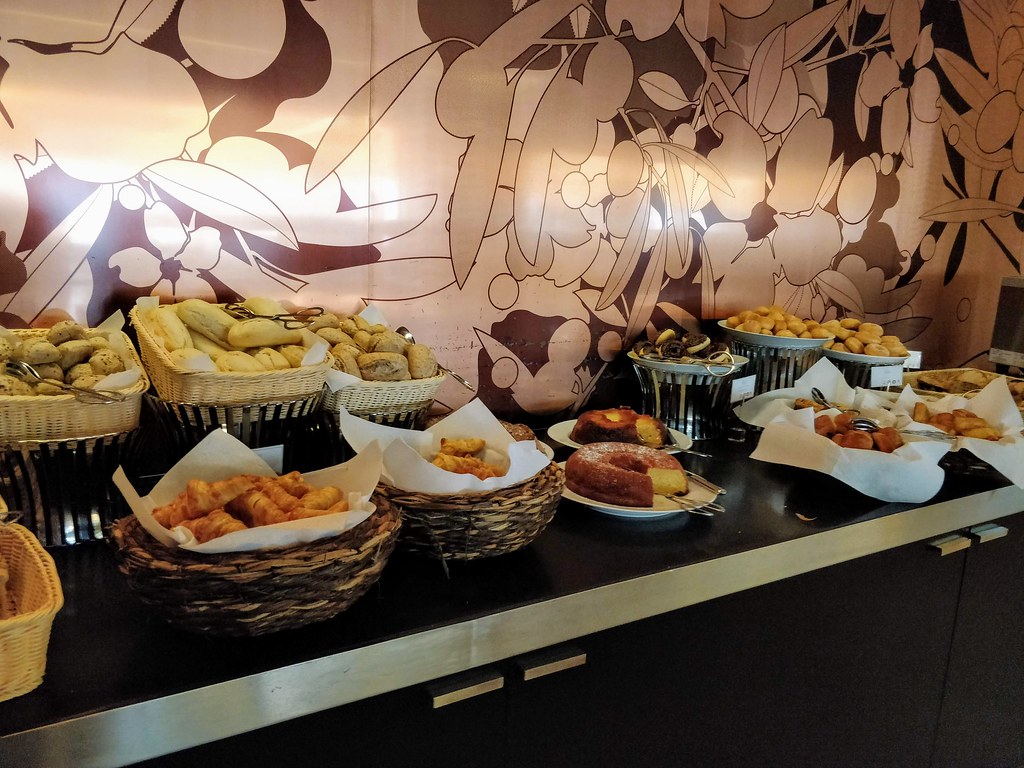 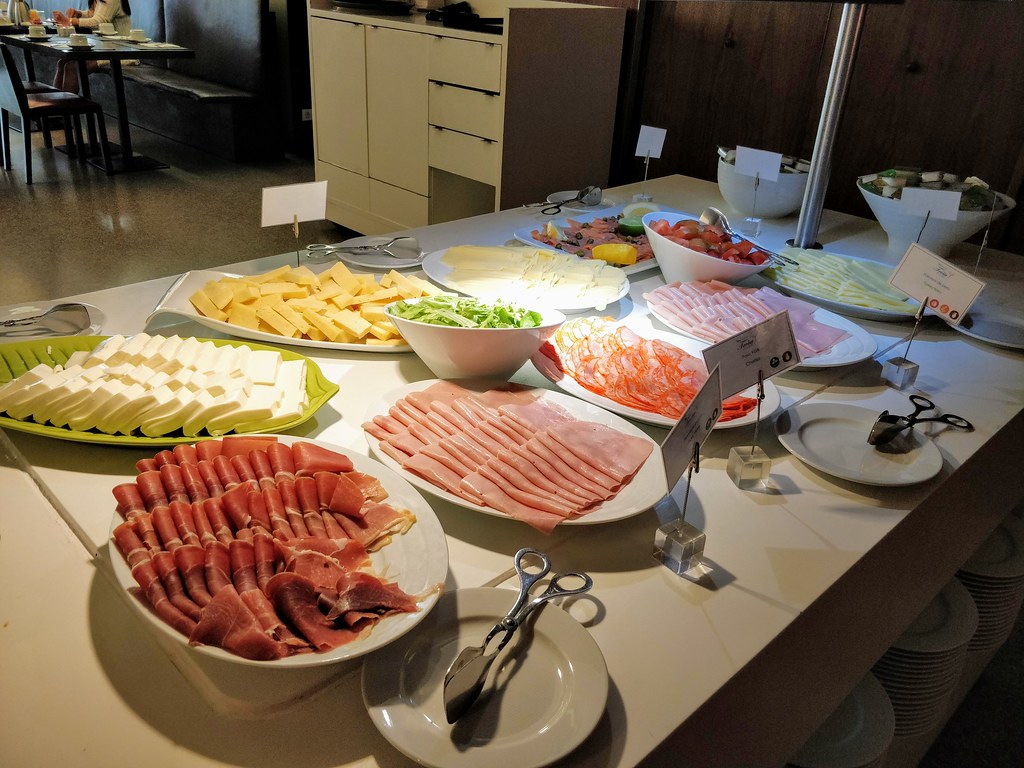 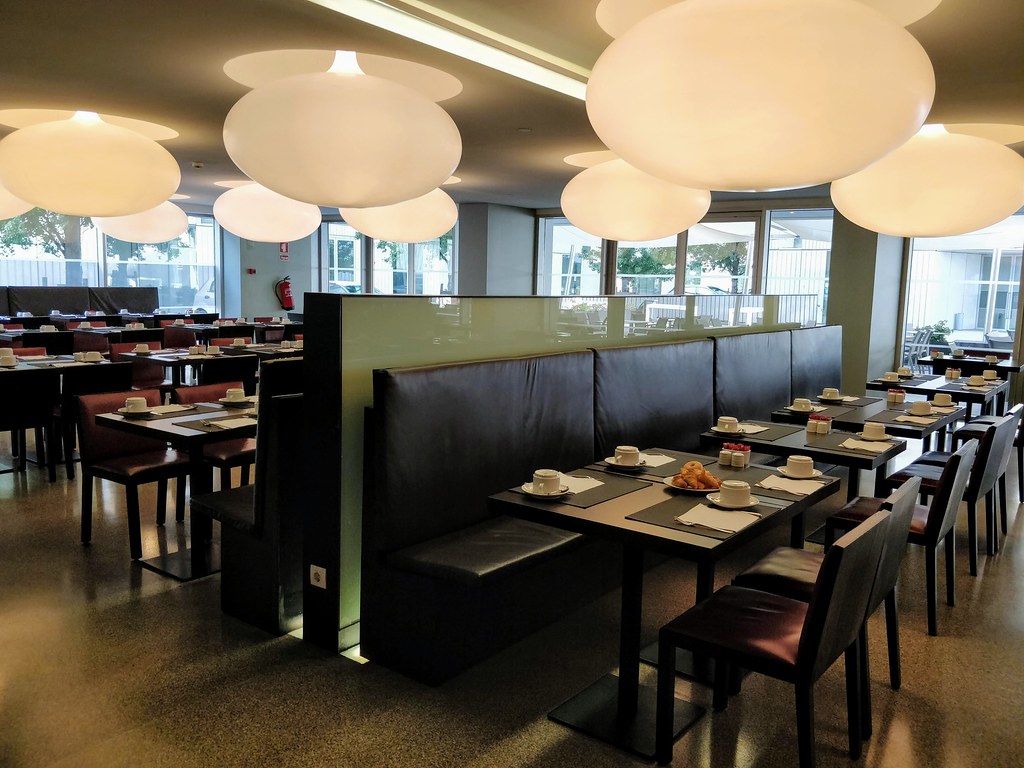 There is a nice selection of food available at the breakfast buffet, including all the breakfast buffet standards like fresh fruit, pastries, cheese and cold cuts. There was also a cooking station for eggs, though they used pre-packaged eggs from a carton for the omelets, so we always asked for sunny side up, so that they would use the fresh eggs.

However, for the hotel being a Design 5-star hotel, the interior design of the breakfast restaurant is pretty mediocre. I mentioned it before, but it really looked like a hospital canteen. Not at all what you expect from a 5 star hotel. The food selection is decent and tastes good, but I would expect a little more from a 5-star hotel. 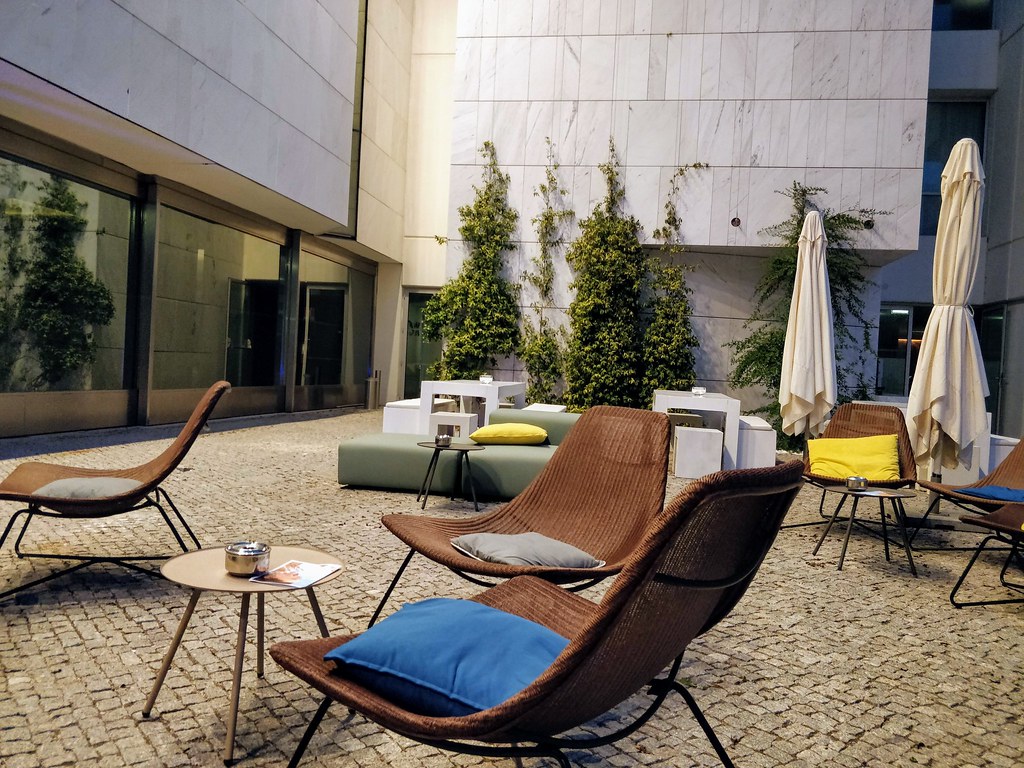 We never tried the food for dinner at the hotel restaurants, though we did order some dessert once at the bar, which was pretty good. It’s definitely nice to have a drink at the bar – they have seats outside and often there is live music playing as well.

The service was decent; the staff was always friendly, and they did try to accommodate us when we requested a new room. I wouldn’t say that the service was outstanding though, everyone just did their job well. 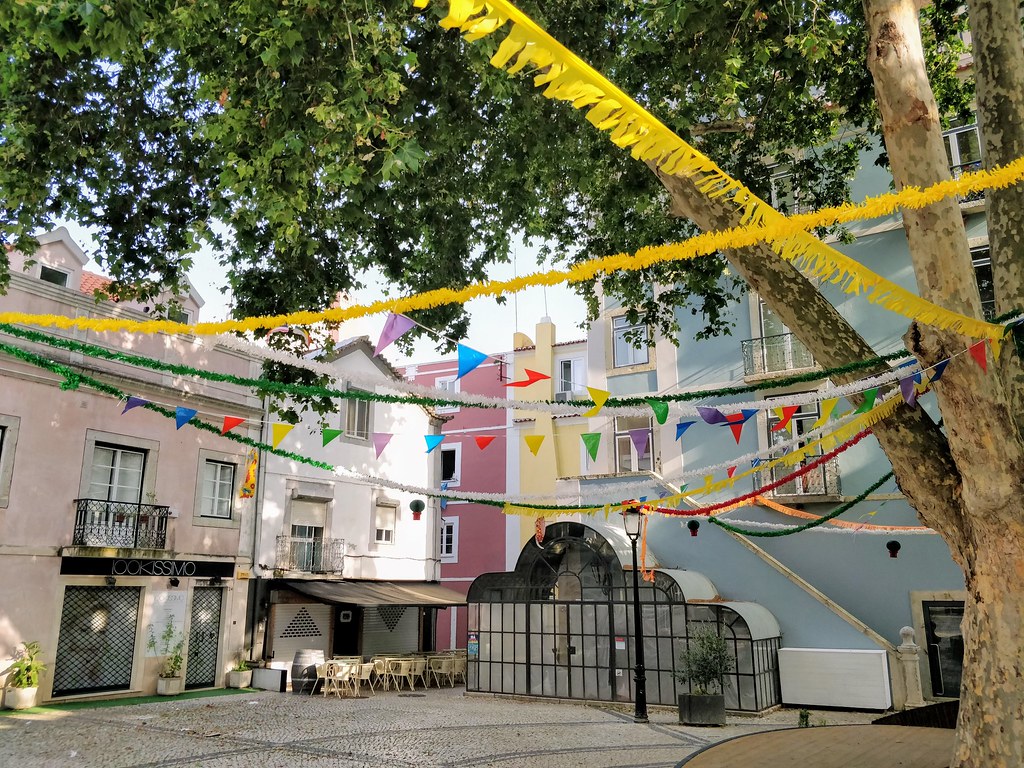 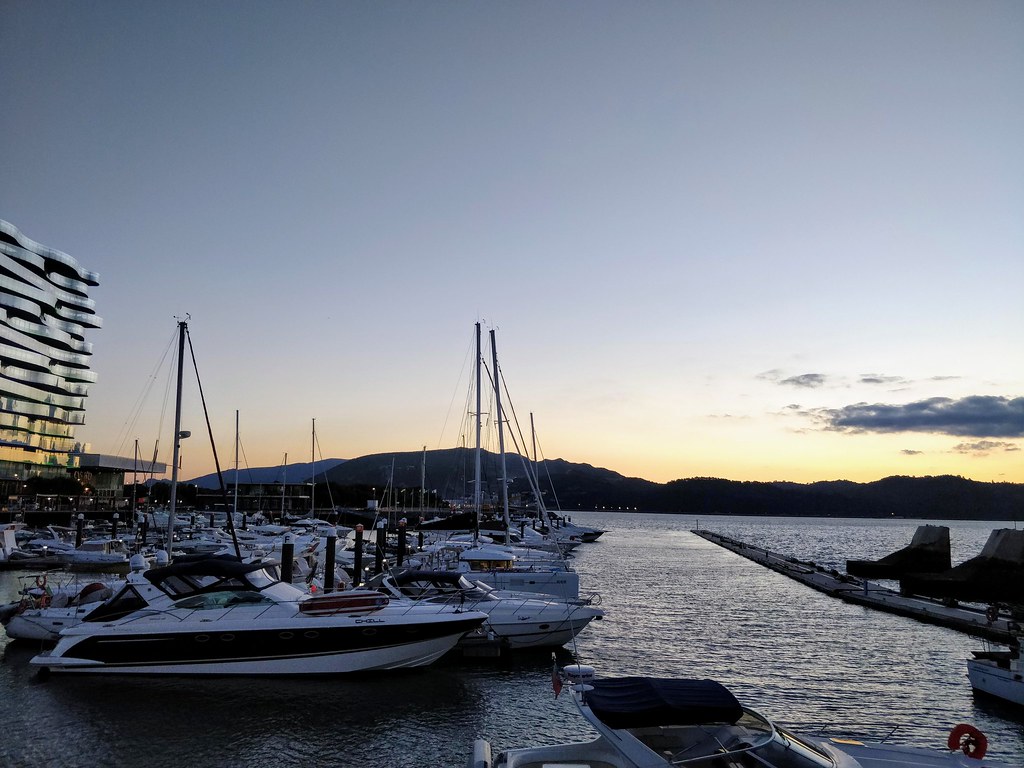 The location, on the one hand, is really amazing because of the beautiful beach that is right next to the hotel. It’s very peaceful and quiet as well, and you can easily hop on the ferry that takes you to the charming village of Setubal, where you can find loads of good restaurants.

On the other hand, though, it’s slightly annoying that the ferry only goes once every hour, and it costs around 7 euros for a round trip, which I personally find ridiculous for a 10-minute ferry ride. Also, there aren’t really any good restaurants in Troia, so every night we had to take the ferry to eat something in Setubal. It’s a bit of a bummer to pay 7 euros every day just for the ferry. 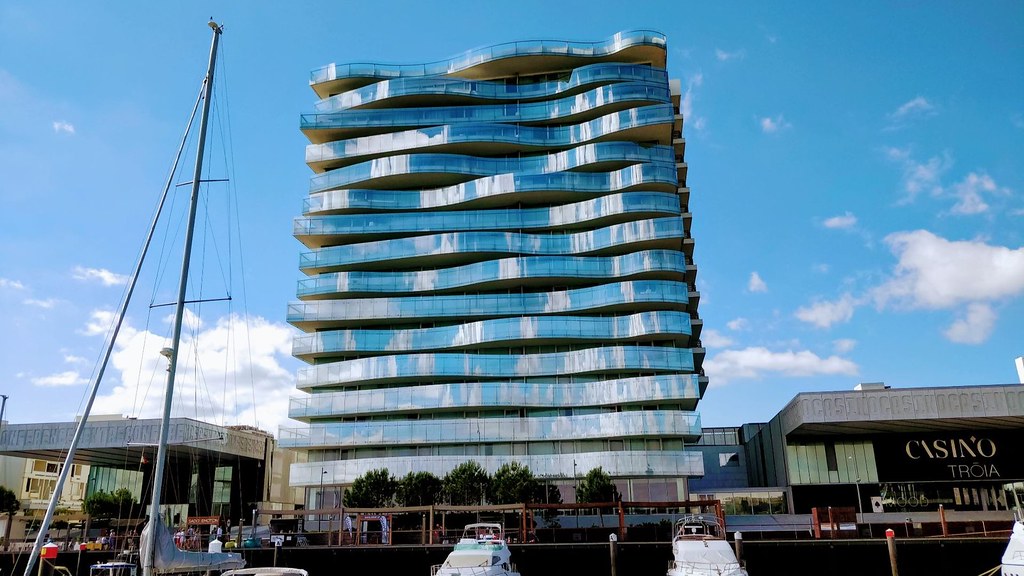 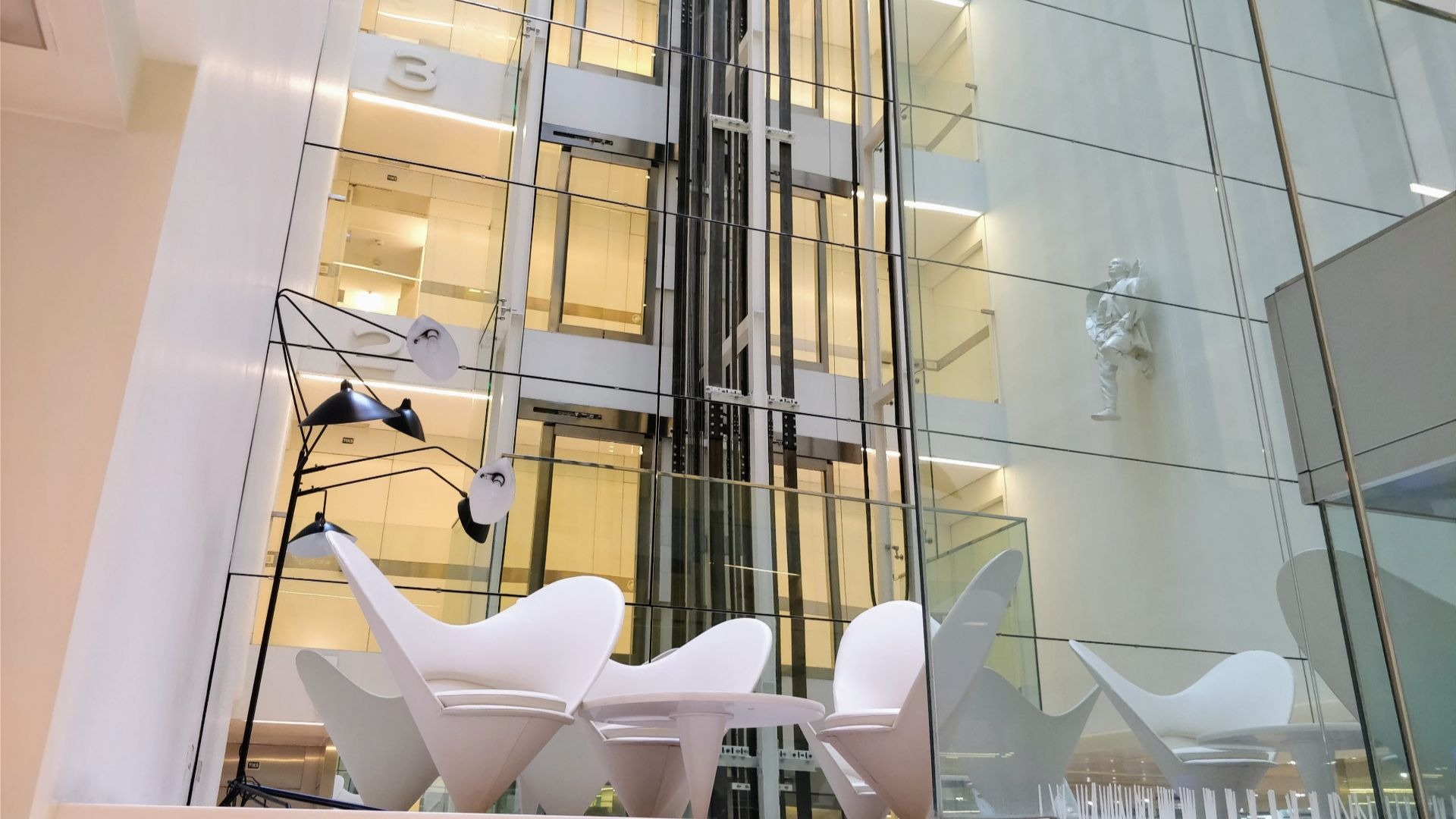