Two Days in Singapore: What To Do, See & Eat

If you have followed our journey on Instagram or Youtube, then you may have seen that we started our digital nomad journey in the bustling city of Singapore! On March the 30th we flew from Barcelona to Singapore and arrived early in the morning the next day. In total, we spent three days in Singapore, so in this blog post we will tell you what we did, ate and saw in this South East Asian hotspot.
We do plan to go back to Singapore in the near future, to expand our little Singapore guide even further 😉

On our first day, we went for a stroll in the neighborhood of Tiong Bahru, located in the west part of the city. It is quite a hipster area with lots of cafes and brunch places serving specialty coffee, as well as some cute boutiques. As we came out of the Tiong Bahru metro stop, we were a bit confused about the direction we had to go to get to the center of this neighborhood, so we were going back and forth until we were drenched in sweat. So before you go, make sure you know in which direction all the coffee shops and boutiques are!

After that, we went to Chinatown, to see the oldest and most famous Hindu temple in Singapore, Sri Mariamman (don’t ask us why it is located in Chinatown…). The building is gorgeous, heavily decorated, and it is dedicated to the goddess Mariamman. The belief is that this goddess has power to cura illnessess. 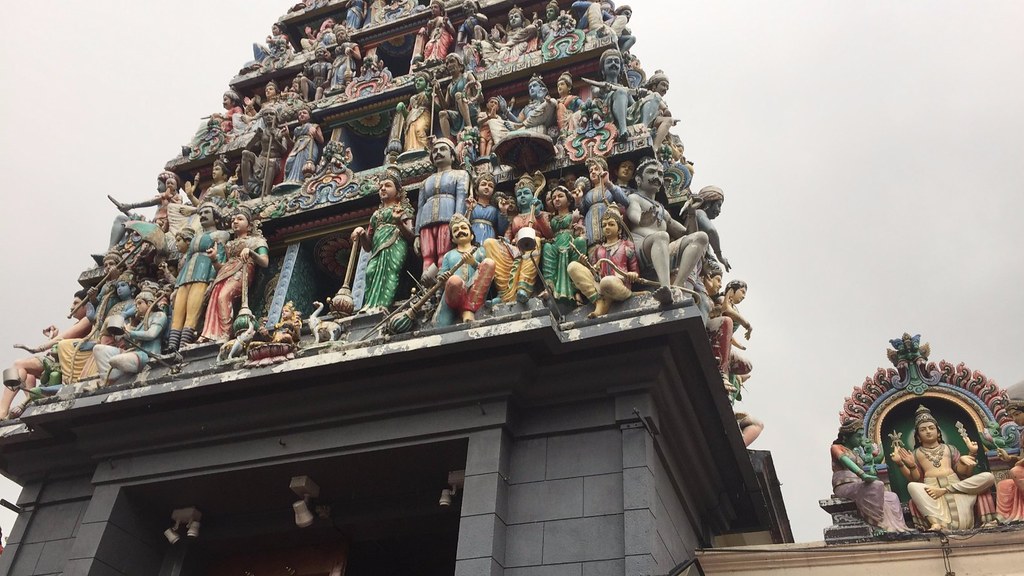 Just around the corner from Sri Mariamman there is the Buddha Tooth Relic temple, where we’ve witnessed some sort of ceremony with many people chanting together. We were surprised to find out the temple has been built only 10 years ago, in 2007. 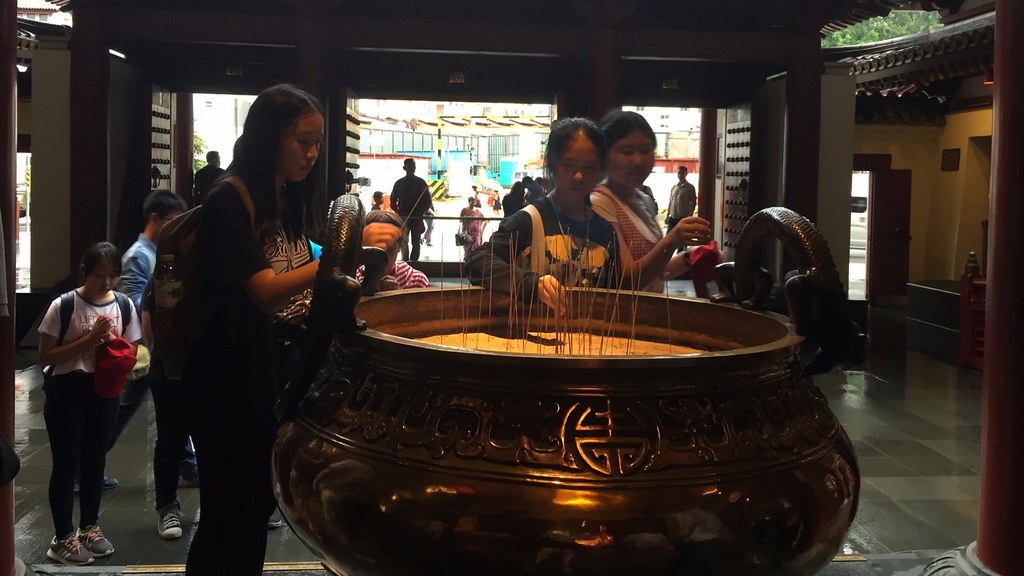 It was also nice to stroll around China town and have a look at all the Chinese shops (even though it was pouring water at one point, so we had to wait for awhile). There is also free wifi in the area, which is always good to know! 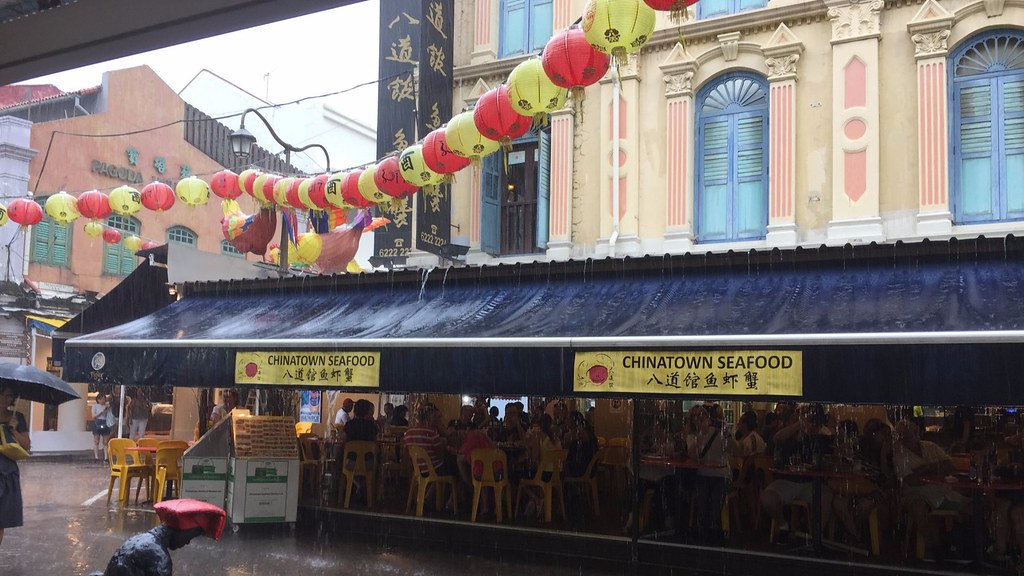 In the evening we went to watch the beautiful Gardens by the Bay, where we’ve watched the light show at the Skytree Garden. It’s quite a big park, and I would recommend going during the day as well, as there is loads to see and it’s just really nice to roam around. The Light show takes place every day at 7.45PM and 8.45PM and it’s for free. Definitely make sure to check it out. It lasts for about 30 minutes and some coreographies are brillant. 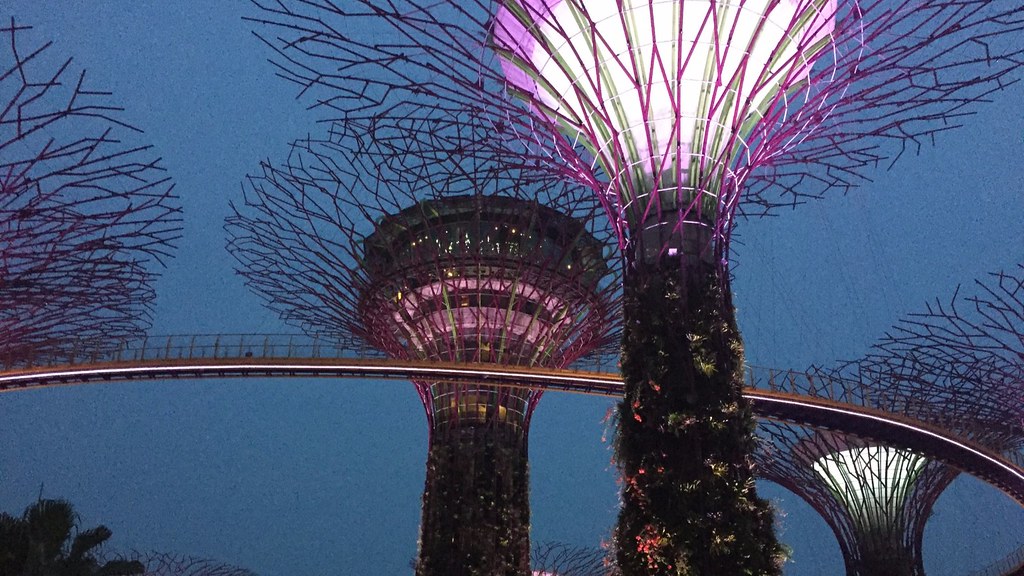 From the Gardens you can take the escalator and go up to the famous Marina Bay Sands Hotel. You don’t actually enter the hotel via this way, but you pass through it and enter the big Mall called The Shoppes. Inside the mall, there is even a small river and you can even take a ride on a Gondola…! That was definitely very interesting to see. 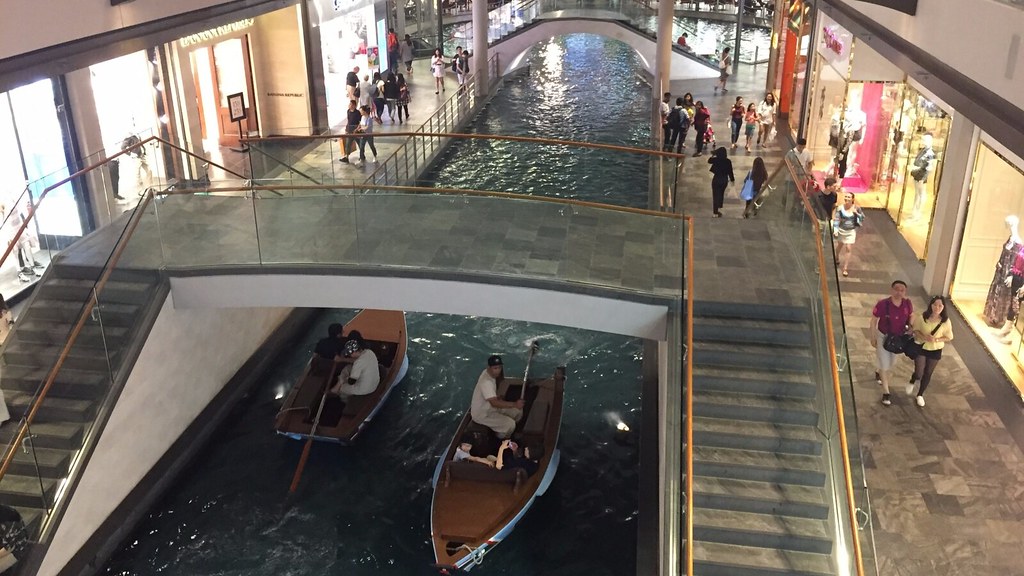 On our second day in Singapore, we strolled around the Marina Bay area, to see the Merlion, which is a mythical creature, half lion and half shrimp, the mascot of the city. It’s a bit of a touristy area, but it’s nice to have a view of the Marina Bay Sands across the water. Later, we also had a look at Haji Lane – a hipster street with lots of little boutiques and cool street art. You will find lots of eclectic fashion stores as well as cute cafes, and it’s nice to just stroll around as well and take some Instagram pictures of the cute houses and street art. Haji Lane is also close to the Middle Easter Quarter, and you can find a big Mosque in this area as well. 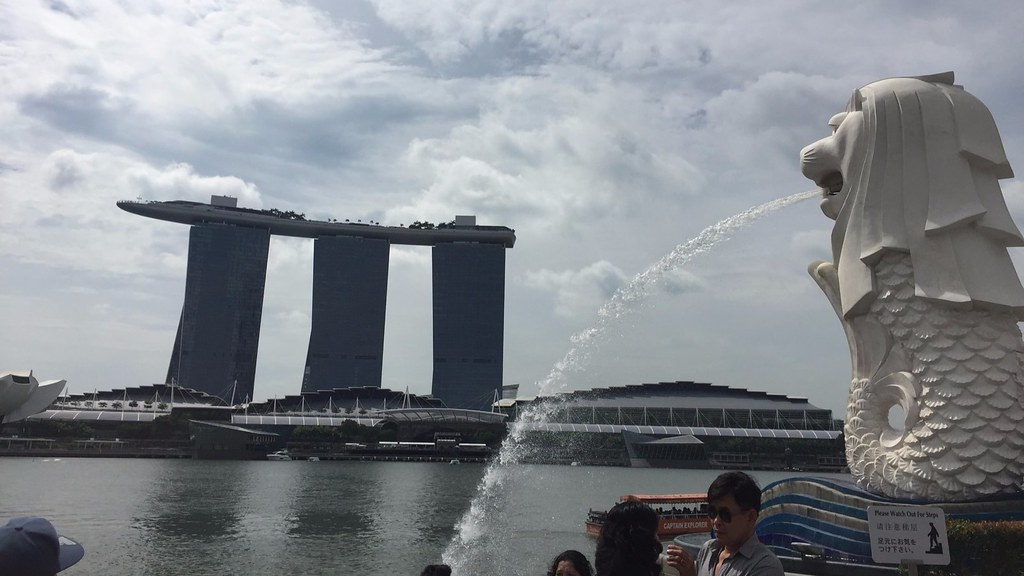 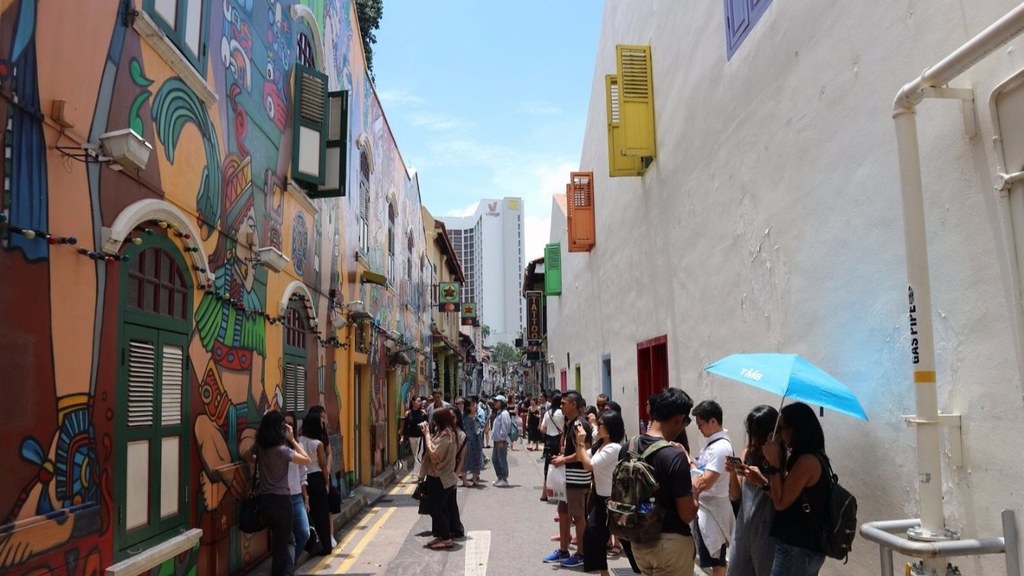 Of course, when in Singapore you can’t miss Orchard Road, which is the main road with all the malls lined up in a row. So if you’re a serious shopaholic, this shopping hotspot is a must. You will find most mainstream clothing chains such as Zara and Uniqlo as well as many luxury brands.

In the evening, we also had a quick look at Little India, and we felt like we were instantly teleported right in the middle of New Delhi! We had some food at the food hawker. Right above the hawker, you will find a multitude of colorful saris on display and goldsmith shops.

Other Things to do

As we only spent two days roaming around the city (the first day we were just dead tired, so we just slept and lounged at our pool), there were quite a few things on our to-do list we didn’t manage to do. Here is a list of things we wished we did, and we definitely will want to do next time we are in Singapore:

Southern Ridges Trail
The Southern Ridges trail is a 9 km long track that connects the parks in the south of Singapore. It looked really cool as you cross beautiful bridges along the trail, which you can do either by foot or by bike. But this is definitely something to do in the early morning and not in the blistering afternoon sun.

Botanic Gardens
The Botanic Gardens have an enormous variety of lush plants, trees, flowers and other botanical wonders, and it’s a beautiful park to wander around. Especially in the morning, this 158-year old garden is supposed to be a serene place, with people practicing Tai Chi and early morning joggers.

Sentosa Island
This man-made island just off the coast of Singapore is literally an island of fun, with lots of beaches, resorts, amusement and water parks. I guess that you really need a day to go there, next time we would like to go there and see what all the fuss is about!

Having a Cocktail on a Rooftop bar
Such as at 1-Altitude, which is the highest rooftop bar in Singapore, even looking down to the Marina Bay Sands hotel. You do need to pay an entrance (around 30$), but it includes a free drink, so we think it’s definitely worth it to enjoy an incredible view.
Address:1 Raffles Place, 63rd floor, Singapore

Where and what to eat

Dim Sum
After our temple tour in Chinatown on the first day, we ate some absolutely delicious dim sum at Tak Po. If you ever find yourself in Singapore’s Chinatown, be sure to pass by! It is a simple and very Chinese eatery, so don’t expect great service, but the dim sum they serve is good and at a very reasonable price also.
Address: 42 Smith Street, Singapore 058954 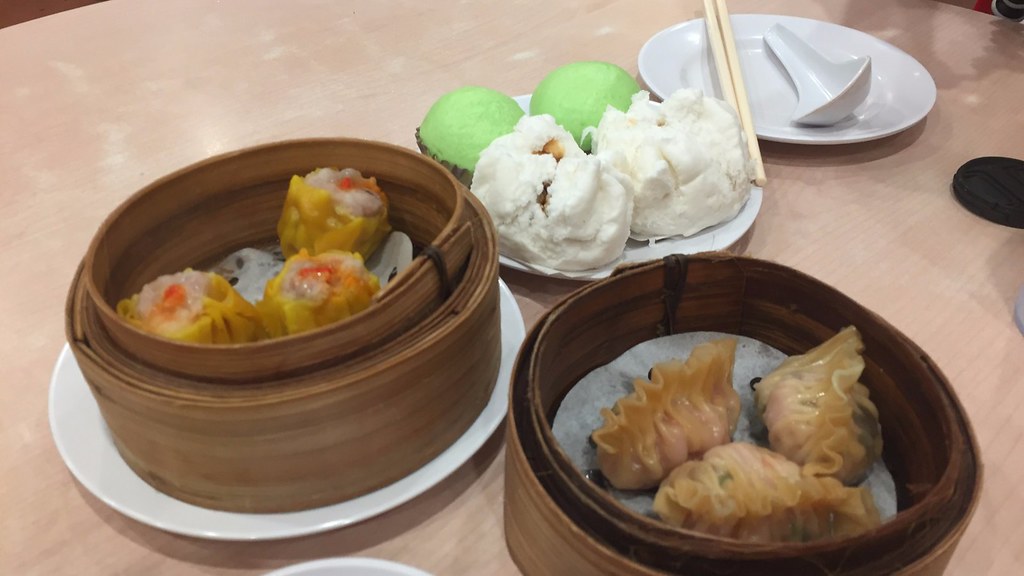 Old Airport Road Food Center
This hawker center is considered one of the best in Singapore and we were lucky that our accommodation was located just 10 minutes away. There are countless food stalls with all kinds of different foods, including Singaporean delicacies such as Black Pepper Crab, Bak Chor Mee (Minced Meat Noodle), Hokkien Prawn Bee (Prawn Noodles), Satay and Tau Huay (Tofu dessert) and many other foods. You will find a mix of Chinese, Malaysian, Indonesian and Indian food stalls. We also found this amazing pancake stall, that sold stuffed pancakes filled with dried coconut, peanuts, red bean paste and pandan paste! Definitely try also the famous Sugarcane juice and some Iced Lemon Tea! Mark Wiens, one of our favorite food YouTuber made a great video showing what sort of food you can expect from this gem.
Address: 51 Old Airport Rd, Singapore 390051 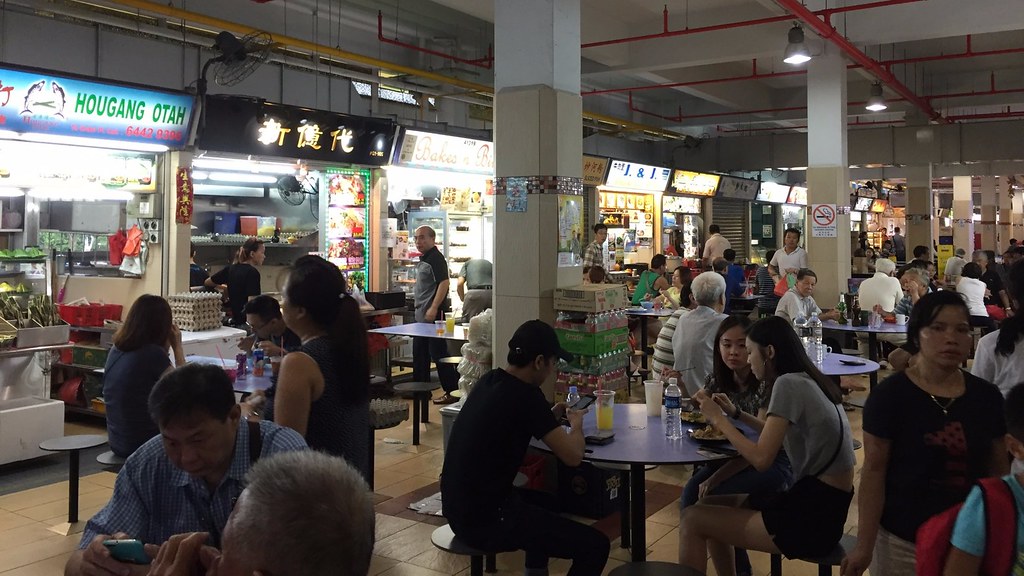 Foodcourt in Shopping Malls
If you are on a budget like us, then it’s always safe to dive into a mall and find the food court in there. Even if you find yourselves in an expensive mall (such as The Shoppes near Marina Bay Sands Hotel) then prices are very reasonable for the food at the food court. You can easily get a main dish for 4-5 euros, and the portions are quite good as well.

Brunch in Tiong Bahru
As mentioned earlier, the neighborhood of Tiong Bahru is a cool hipster area which also includes some really cool brunch places as well. We had brunch at PS Cafe Petit, which serves some Italian foods (even though they have a French name..) and they also have some delicious-looking cakes! The only “issue” is represented by the price. This spot is indeed much more expensive than everything we’ve tried. We wanted to try the cakes, yet we didn’t really like the idea of paying 16$ for a slice of cake.
We’ve also heard great things about ‘Tiong Bahru Bakery’, so if you’re around, go check it out.
Address PS Cafe Petit: Blk 78 Guan Chuan Street #01-41, Singapore 160078 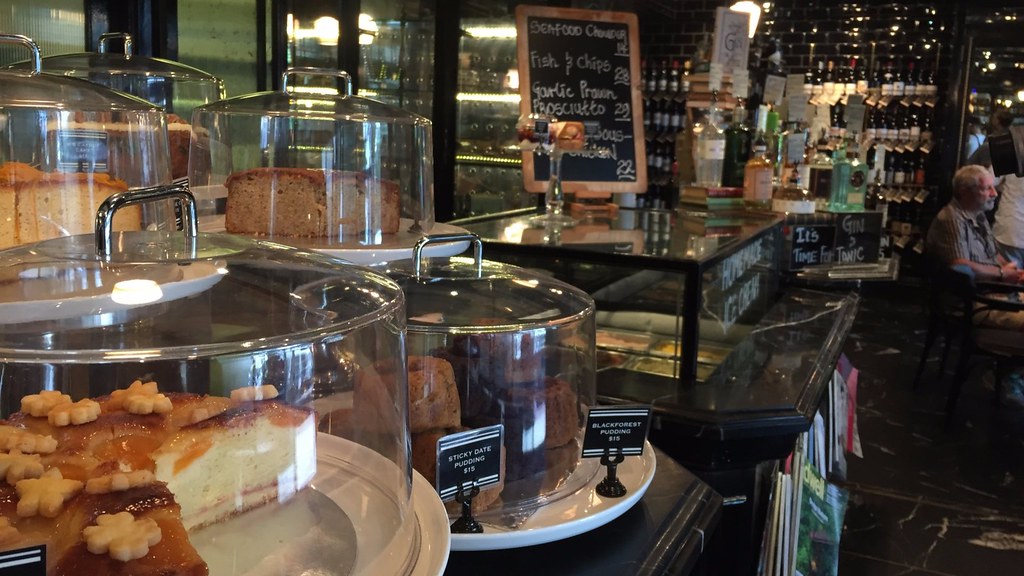 Little India Tekka Centre
The hawker stalls in Little India’s Tekka Centre have a wide range of Indian delicacies and you will find a lot of locals eating here (mostly Indian of course). We tried some butter chicken curry with some garlic naan bread and it was very tasty! We did, however, prefer the Old Airport food court, as it was much cleaner than this one, however for some authentic and cheap Indian food, this is definitely a must-try.
Address: Bukit Timah Rd

Other Tips from Things Nomads Do

The subway in Singapore is easy, efficient and cheap! So it’s definitely the best option for moving around Singapore. Tip: The subway ticket machines do not accept cards and often just up to 5SG$ notes, so keep that in mind! Taxis are not too expensive either, compared to other major cities in US, Australia or Europe. They will never rip you off either because they always use meters.

Power Outlet
In Singapore, they use the UK standard plug outlets. 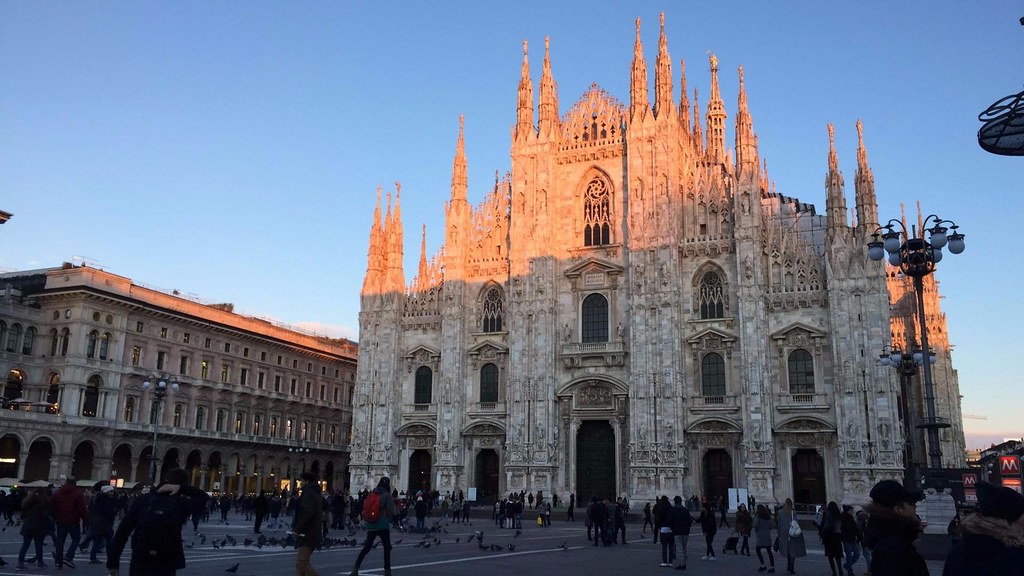 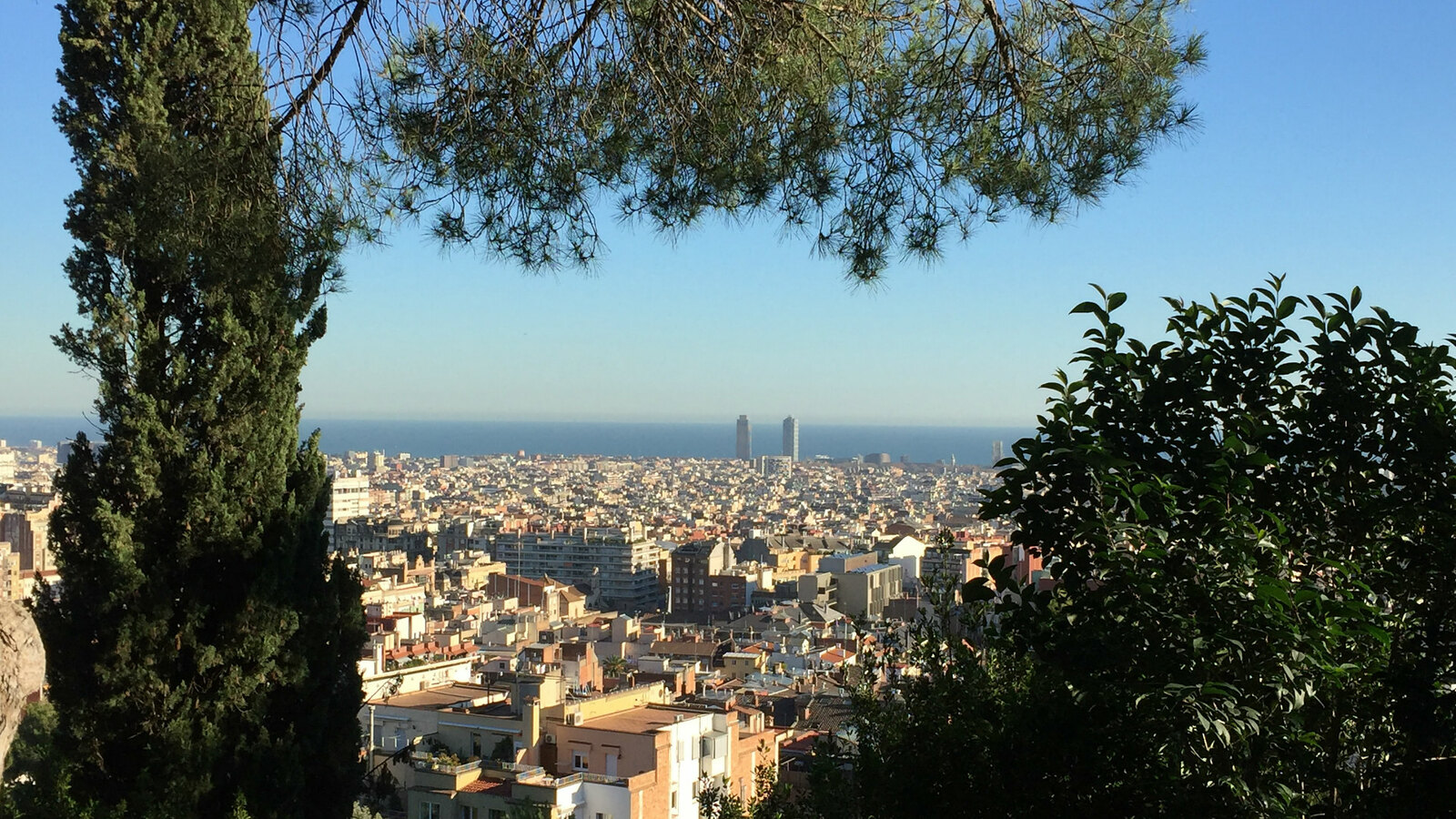